Unique Smoking Pipe Collection to be Auctioned at Bellmans in May 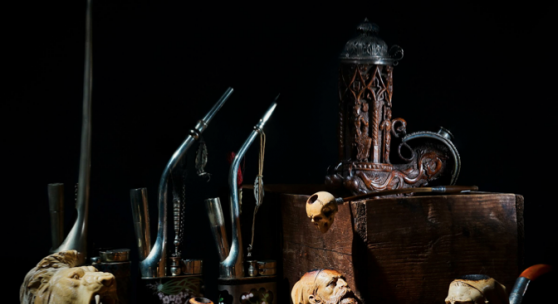 Bellmans is selling a unique collection of smoking pipes, collected by the Managing Director of one of the leading tobacco companies on Tuesday, 25th May 2021. Charles Finch collected around 600 pipes over almost 40 years at the beginning of the 20th century. The estimates for the 83 lots range from £80 to £250, with some lots including up to 20 pipes.

Charles Finch started his career in the tobacco industry in 1912 at the age of 13 when he worked as a clerk for cigar and cigarette importer EE Johnson Ltd, based in Hart Street, London near Tower Hill. His career took him all the way up to be the Managing Director of its subsidiary The Ring Cigarette Company, where he received a commission of 2 Shillings for every 1000 cigarettes sold by the firm. In 1951 he became a Freeman of the City of London and six years later the company was granted a Royal Warrant by Queen Elizabeth The Queen Mother. The business was later acquired by Sobranie.

Charles started collecting around the first World War and continued to do so while working in the industry. While his son Alan was still a child he accompanied him on weekend trips to junk shops and markets, always trying to find unusual pipes of all shapes and forms to add to the collection. On 1st January 1947 Charles handed the entire collection over to Alan and on his death the collection was passed on to his surviving brothers Dennis and Kenneth. Their descendants are now selling the entire collection.

Lee Cox, Bellmans' specialist in charge of the pipe auction, commented: "As you can imagine, I was extremely excited to be shown such an outstanding collection and could not wait to start cataloguing and researching it. The vast quantity of pipes in all their variations is simply impressive. I had no idea that pipes could come in so many different shapes, styles and materials - it shows the deep knowledge of the subject and the fascination Mr Finch had for his collection. It is a once in a lifetime consignment."

Among the highlights are a mid-19th century Continental carved wood pipe bowl, which is modelled as a pulpit and carved with knights standing between spiral columns - it is estimated at £150 - £250. There are several lots with 19th century Meerschaum pipes including three Memento Mori ones of different sizes are expected to fetch £150 - £250, while two modelled as Turk's heads with large bushy beards are included in the auction at an estimate of £100 - £200.


Charles Finch collected around 600 pipes over almost 40 years at the beginning of the 20th century. The estimates for the 83 lots range from £80 to £250, with some lots including up to 20 pipes.
Bellmans Auctioneers