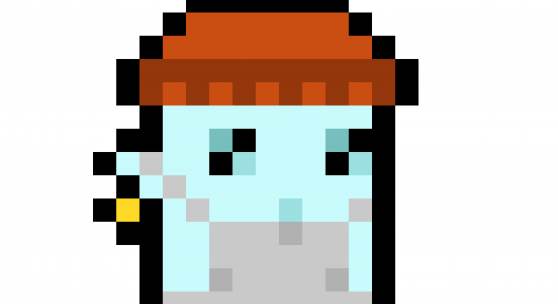 LARVA LABS, CRYPTOPUNK #7523, 2017
Natively Digital will include a rare object from CryptoPunks, a collection of 10,000 unique collectible characters that are considered some of the most iconic NFTs ever created. CryptoPunks is an early crypto art project beloved by digital artists and collectors and is regarded as one of the driving bodies of work in the modern NFT movement. No two CryptoPunks are exactly alike, and these viral crypto collectibles have sold at auction for upwards of $8 million dollars. Natively Digital will feature   View the animated version here   

CryptoPunk #7523, one of nine “Alien” punks and the only of those nine with a medical mask. CryptoPunk #7523 was created in 2017 by artist studio Larva Labs that unknowingly accessorized this CryptoPunk with what would become the ubiquitous symbol of the COVID-19 era, making #7523 one of the most desirable objects of the collection. The current owner and seller of CryptoPunks #7523 is Sillytuna, a pseudonymous crypto evangelist and NFT collector. Sillytuna will donate 5% of their sale proceeds to the development of projects that support Larva Labs’ efforts to expand CryptoPunks and Meebits, two of their community driven art initiatives. In addition, another 5% of the proceeds will be donated to organizations involved with the ongoing COVID relief across the world.

ANNA RIDLER, THE SHELL RECORD, 2021
The auction will also feature digital artist Anna Ridler, a leading figure in the world of generative art and AI who is renowned for her use of datasets to create new and unusual digital artworks. One of her most notable crypto artworks was Bloemenveiling, an online auction of short videos of tulips generated by machine learning that used smart contracts on the Ethereum network to sell the work and bots to help drive speculative prices. For Natively Digital, Ridler presents The Shell Record, a continuation of her exploration of this technology, while focusing its attention on the history of barter and exchange through one of its earliest mediums— shells. The Shell Record features a series of images of different shells gathered from the foreshore of the river Thames which form part of a dataset for a moving image work created using generative adversarial networks (GAN), a recent innovation in machine learning. Her work has been exhibited at cultural institutions worldwide including the Victoria and Albert Museum, the Barbican Centre, and the Centre Pompidou.

About Robert Alice, Co-Curator of Natively Digital
Robert Alice is a London based artist and pioneer in the crypto art and NFT space. He is best known for the landmark work, Portraits of a Mind (2019 -). A global art project to decentralize Bitcoin's codebase into 40 fragments, the project is currently globally decentralized to 15 cities on 4 continents, from San Francisco to Tokyo, including a number of institutional collections to be announced later this year.