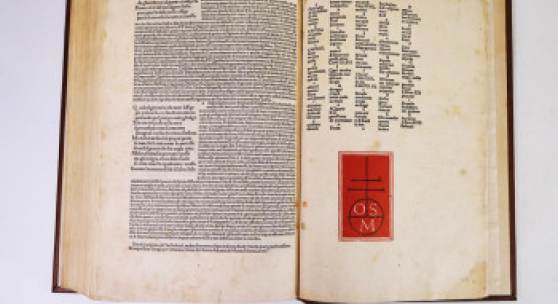 Top lot of the sale was an early book - a 1484 copy of Dante Alighieri's La Comedia, with the commentary of Christophoro Landino, which counts among previous owners members of the Strozzi family and the Athenaeum Library. It carried an estimate of £2,000 - £3,000, but reached three times its high estimate and sold for £9,000 hammer price (plus buyer's premium). Among other early books with the same estimate was the Summa theologiae. Pars secunda: secunda pars, by Saint Thomas Aquinas (c. 1225 - 74), edited by Ludovicus de Cremona and one of the earliest and rarest editions from the second Mantuan Press. Published before 1474, it fetched £7,000. Bellmans also sold Epistole Eroiche ... Tradotte da Remigio Fiorentino by Ovid (43 BC - 17 AD). The Paris edition from 1762 in a fine binding by Antoine Michel Padeloup or Padeloup Le Jeune sold for £2,600 against an estimate of £200 - £300.

Compiled in the late 15th-century by Dominican inquisitors, the Malleus maleficarum (literally, the ‘hammer of witches’) is the best known of the earliest treatises on witchcraft. The first printed edition appeared in Strasbourg in 1486, Bellmans sold an edition from 1588, but only one of the two volumes was included and it carried an estimate of £500 - £800 with the hammer going down at £1,800.

An exceptionally rare menu celebrating a landmark in British aviation - the first flight from London to Brighton sold for £750 against an estimate of £200 - £300. The dinner recorded in the menu, hosted by local businessman and keen supporter of aviation Harry Preston, commemorates the first flight from London to Brighton which was taken by Oscar Morison in his Bleriot XI monoplane. Flying from Brooklands Aerodrome, near Weybridge, on the 15th February 1911 (taking off at 3.50 pm), he crash-landed on Brighton beach at “Banjo Groyne” at 4.55 pm. He was unharmed and attended the dinner in his honour just five days later.

Another unusual lot is Robert Willis's book An Attempt to Analyse the Automaton Chess Player of Mr. de Kempelen from 1821. This first edition describes how Wolfgang von Kempelen (1734-1804) first displayed his celebrated “Automaton Chess Player” (or “The Mechanical Turk”) in 1770. It convinced many who saw it that, through its mechanism alone, it was able to hold its own against human opponents, including, reputedly, Napoleon Bonaparte and Benjamin Franklin. In 1821, however, Robert Willis, a Cambridge professor and mechanical engineer, definitively exposed it in the present work as a hoax and revealed what some had already suspected: that the mechanism cunningly concealed a hidden human operator. The book was part of the collection from the Library of the late Sir George Engle and was estimated to fetch £500 - £800, but sold for £5,000.

A hand-coloured engraved map of Asia from 1725 by Matthaeus Seutter (1678 - 1757) of Augsburg, sold for £1,200 against an estimate of £300 - £500. The sale also included a collection of travel books, with a particular emphasis on the Pacific, and a further selection of Science Books from the Collection of Peter and Margarethe Braune.

Among them James Cook's An Account of the Voyages...for making Discoveries in the Southern Hemisphere sold for three times its top estimate for £1,800 and The Searchlight. H.M.S. "Lion." sold for £1,400 against an estimate of £400 - £600. The first edition in French of Charles Darwin's (1809-82) De l’ Origine des Espèces ou des Lois du Progrès chez lestres Organisés from the Collection of Peter and Margarethe Braune was estimated at £500 - £800, but the hammer went down at £1,100. Included in the same collection was Michael Faraday's (1791-1867) Experimental Researches in Electricity sold for ten times its top estimate for £5,000. Nicholas Worskett, Bellmans' specialist in charge, says: "We are thrilled with the result of our July auction. Early books and rare bindings did particularly well and we were pleased to see so many bidders return to our saleroom in West Sussex."

www.bellmans.co.uk.
Bellmans next auctions are from the 3rd to 6th August and 7th to 10th September. Please contact Bellmans, if you would like to consign any items for future auctions.