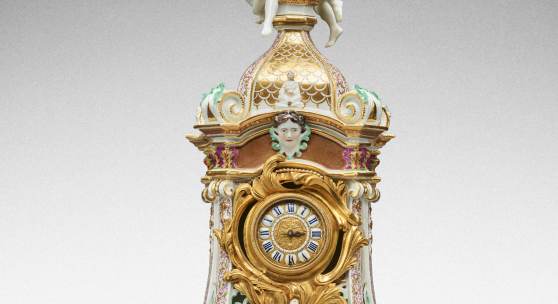 NEW YORK, 26 August 2021 – Sotheby’s today unveils highlights from one of the greatest pre-war collections of Meissen porcelain to appear at auction in more than 60 years. Meticulously assembled by Dr. Franz and Margarethe Oppenheimer in the early decades of the 20th century, this exquisite group of 117 lots is among the most significant ensembles of early 18th century Meissen porcelain from Europe’s first porcelain manufactory – many of which are distinguished by illustrious royal and noble provenance, including pieces from the collection of Augustus the Strong, Elector of Saxony and King of Poland, and founder of the Meissen porcelain factory. Presented in a dedicated live auction on 14 September in New York, the collection is poised to achieve more than $2 million, with individual estimates ranging from $300 to $400,000 and approximately one third of the lots offered without reserve.

All of the works on offer will be on view in Sotheby’s York Avenue galleries beginning 7 September, ahead of the live auction.

ABOUT THE COLLECTION
Franz and Margarethe Oppenheimer were connoisseur collectors, determined to build a magnificent Meissen collection at a time when it was still possible to acquire important pieces as they were being deaccessioned from the Royal collections in Dresden. Dr. Franz Oppenheimer, a native of Hamburg, was a lawyer and became part owner and CEO of Emanuel Friedlaender und Co, a private company that dominated the Silesian coal industry before WWII. Margarethe, whom he married in 1902, was born in Vienna and was his partner in building their porcelain collection.

The couple lived in a grand apartment block on Regentenstrasse in Berlin, immediately next to the Tiergarten – the heart of Berlin’s collecting community in the early 20th century. In 1927, like many serious Berlin connoisseurs, the couple commissioned a private catalogue of their collection to be written by Professor Ludwig Schnorr von Carolsfeld, curator of the nearby Berliner Schlossmuseum. Professor von Carolsfeld catalogued 240 sets and individual pieces of porcelain, a number of which are featured in the September sale. The couple continued to collect after the 1927 catalogue and added at least 126 objects to their holdings, each of which were marked with red inventory numbers.

Once the Nazis came to power Franz Oppenheimer was persecuted because of his Jewish origins. As a consequence, in around December 1936, he and Margarethe fled from Berlin to the comparative safety of Vienna, having paid punitive emigration taxes to the Nazi Government. They rented an apartment close to the Belvedere in Vienna’s third district and were able to take some possessions, including part of their Meissen collection, with them.

The couple’s exile in Vienna did not last long. German troops entered Austria on March 12, 1938, and Adolf Hitler proclaimed the Anschluss of Austria into Germany the following day. The Oppenheimers escaped to Budapest the day before the Anschluss carrying only hand luggage. From Hungary they travelled via Sweden and Colombia before finally reaching their new home in New York three and a half years later - in December 1941. By 1941, their resources had been further eroded by another tranche of Flight Tax that they had to pay to emigrate from Austria. The couple chose to spend the remainder of their lives in an apartment on East 86th Street in Manhattan, just a few blocks from Sotheby’s present-day headquarters.

The Nazi authorities confiscated everything that they found in the Oppenheimers’ Vienna apartment but discovered that the collectors had succeeded in removing at least two crates of their most valuable porcelain before their flight. It is likely that some of the porcelain in this sale was smuggled out of Vienna to keep it out of Nazi hands. It is not known precisely when the objects in this sale were lost to the Oppenheimers, however they were with their next owner, another great connoisseur-collector and an active opponent of the Nazi regime, Fritz Mannheimer, before his premature death in 1939.

Mannheimer was born in Germany in 1890 and moved as a young man to Amsterdam where he established the Dutch branch of the Berlin based Mendelssohn Bank in 1920. In less than 20 years, he built both a thriving bank and an art collection of outstanding breadth and quality. Like the Oppenheimers, he commissioned a scholar, Otto von Falke, late director of the Berlin Kunstgewerbemuseum, to catalogue his collection. The porcelain in this sale was all acquired after von Falke completed his work in March 1936.

After Kristallnacht, on 9 November 1938, the Mendelssohn Bank was shuttered by the Nazis and Fritz Mannheimer lost its collaboration, and its balance sheet, for his Amsterdam bank. While Mannheimer kept trading, his last major deal was the refinancing of a part of the French National debt in 1939; this failed – partly due to the deteriorating political situation in Europe – and the young banker was obliged to buy back unplaced French bonds at his own expense. This triggered a severe liquidity crisis for his bank and for himself. On August 8, 1939, in the midst of the bank’s crisis, Mannheimer left for a break in France. Upon his arrival in Vaucresson, he suffered a massive heart attack and died only a few hours later.

Mannheimer’s bank stopped its operations immediately after his death. An audit showed the bank carried a large debt of over 42 million guilders, for which the collector's personal estate was jointly liable. Experts from the Rijksmuseum were brought in and valued the art collection at six and a half million guilders and Mannheimer’s executors decided to liquidate it as a contribution to the Bank’s losses. A member of the SS based in Holland, acquired the collection for Adolf Hitler in 1941.