BANKSY’S LOVE IS IN THE BIN 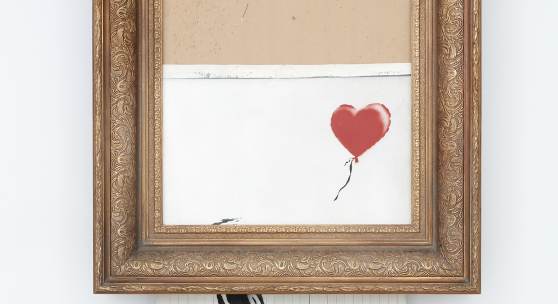 **SPECIAL VIEW THIS SATURDAY AND SUNDAY IN SOTHEBY’S NEW BOND ST. GALLERIES** BEFORE TOURING TO HONG KONG, TAIPEI, NEW YORK AND BACK TO LONDON

“Auctions are live theatre, and as with any live production we need to prepare for all eventualities, but we were Banskyed, and you can never prepare yourself for that. Banksy is the ultimate art world outlaw, and in one exhilarating and shocking moment, Sotheby’s became the unwitting stage for his audacious piece of performance art. We are looking forward to welcoming Love is in the Bin back to the very rooms where it was created this autumn!” Oliver Barker, Auctioneer and Chairman of Sotheby’s Europe

Sotheby’s London, 3 September 2021: Banksy’s Love is in the Bin will return to Sotheby’s New Bond Street galleries this October, almost three years to the date since the artwork shredded in this very location on 5 October 2018.

Passing through a hidden shredder just seconds after the hammer fell, the “nation’s favourite artwork” Girl with Balloon seemingly auto-destructed while hanging on the wall in Sotheby’s packed auction room. Capturing the world by surprise, this unexpected piece of performance art became instant art history, making it the first time a new work had been created in the course of an auction.

In the days that followed, the shredded artwork was granted a new certificate and date by Pest Control, Banksy’s authentication body, and given the new title, Love is in the Bin. The collector who had placed the record £1 million winning bid on Girl with Balloon decided to keep the new work.* Looking back on the event, she explains: “That surreal evening three years ago, I became the accidental - but very privileged - owner of Love is in the Bin. It has been an incredible journey to have been part of the story of how one of the most famous artworks in the world came to be, but now it is time to let the painting go.”

“Love is in the Bin was born of the most spectacular artistic happening of the 21st century. When Girl with Balloon ‘self-destructed’ in our saleroom, Banksy sparked a global sensation that has since become a cultural phenomenon. During that memorable night, Banksy did not so much destroy an artwork by shredding it, but instead created one. Today this piece is considered heir to a venerated legacy of anti-establishment art that began with DADA and Marcel Duchamp more than a century ago. Notorious, daring, and culturally ubiquitous, Love is in the Bin is the ultimate Banksy artwork and a true icon of recent art history.” - Alex Branczik, Sotheby’s Chairman, Modern & Contemporary Art

Love is in the Bin will go on public exhibition from Saturday (4 September) at noon for a special two-day preview in London, before embarking on a global tour to Hong Kong, Taipei, New York and back to New Bond Street once more. The exhibition will be followed by an auction on the evening of October 14, in which the painting is estimated to sell for between £4-6 million ($5.5-8.2 million).

Hailed as “Banksy’s greatest work” by The Guardian and predicted by the BBC as a painting “that will come to be seen as one of the most significant artworks of the early 21st Century”, Love is in the Bin sparked over 30,000 global news stories and swiftly became a cultural phenomenon. Recognised all over the world, the viral image spawned multiple memes and became the subject for political cartoonists, while brands including McDonald’s, Perrier and IKEA appropriated Banksy’s painting for their own advertisements, products and logos - the latter of which posted a how-to shred-it-yourself guide on the company’s Instagram. When Banksy himself confirmed the news on his Instagram account, his following grew by one million people overnight. 1,000 people came to visit Sotheby’s exhibition of the work in a single day.

In 2018, Sotheby’s joined a long and distinguished list of art establishments that have been subject to Banksy’s artistic hand. Earlier events include the installation of an idyllic pastoral oil painting featuring a crime scene demarcated with police incident tape on the wall of Tate Britain in 2003; a yellow smiley-emoticon-faced Mona Lisa which appeared on a wall at the Louvre in 2004; and a fake cave painting, depicting a stick figure pushing a shopping trolley, which spent three unauthorised days on display at the British Museum in 2005. The following year, a life-size inflatable Guantanamo Bay prisoner dressed in an orange jumpsuit appeared in Disneyland, ahead of the artist’s debut and breakthrough US exhibition in Los Angeles.

Banksy is no stranger to Sotheby’s New Bond Street, some fourteen years earlier, in 2004, Banksy secretly stencilled a gangsta rat on the gallery wall during the exhibition preview of Damien Hirst’s Pharmacy sale.


Banksy's Love is in the Bin, 2018
Sotheby’s Auktionshaus