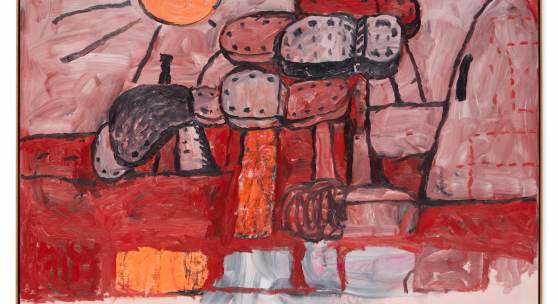 Starring in the inaugural edition of The Now Evening Sale is Yoshitomo Nara’s early, large-scale Nice to See You Again (estimate $8/12 million), executed in 1996 and coming to market for the first time in more than 15 years.  Nara is one of the leading international artists of our time, and this depiction of seemingly-innocent but menacing little girl is his best-known subject. Determinedly thrusting her knife at the viewer, Nara's heroine stands as a symbol of infantilized innocence raging against an oppressive and more powerful world. As Nara puts it: ‘I kind of see the children among other, bigger, bad people all around them, who are holding bigger knives.’ A similar work, Knife Behind Back, was sold for a record-breaking $25m in 2019, since when Nara has remained one of the most in-demand artists working today.

The sale will also feature Mark Bradford’s Method Man from 2004 -  a standout example of the artist’s acclaimed abstract practice, executed at a pivotal turning point when he embraced a larger scale and began to broaden the scope of his practice, incorporating not only the endpapers used from dying hair in his mother’s salon, but also materials sourced from the streets of his immediate neighborhood in South Central Los Angeles - discarded posters, newsprint, magazines, and endpapers. Acquired in the year it was executed, the work has been held in a private collection ever since.

“This sale context provides the opportunity to be highly selective and curatorial. In lending connoisseurship to these markets and elevating exceptional examples, we are providing a previously absent standalone platform for  21st-century masterpieces and showcasing to the widest possible audience the diverse array of artists that we believe will form the apex of the next generation of Contemporary Art.”
Lucius Elliott, Sotheby’s Head of The Now Evening Auctions, New York