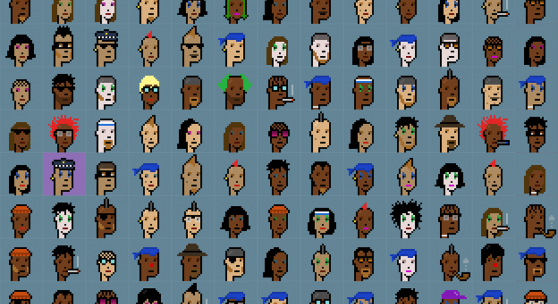 Estimated to Achieve $20/30 Million, The Highest Valued Estimate Ever for an NFT Lot at Auction

NEW YORK, 8 February 2022 – Building on the success of Sotheby’s inaugural series of NFT sales in 2021, which to date have achieved $100 million since launching less than a year ago, Sotheby’s announces the first dedicated live evening auction for NFTs, Punk It!, a single-lot sale of 104 CryptoPunks on 23 February. Carrying the landmark estimate of $20/30 million, the sale marks the highest valued estimate for an NFT or digital art ever offered at auction, and follows Sotheby’s record-breaking sale of CryptoPunk #7523 for $11.8 million in June 2021. The live evening auction will also bring together the physical and digital in an unprecedented showcase for NFTs and digital art with a presentation on par with the most significant and high-profile sales for Contemporary and Modern art.

CryptoPunks, which were released in 2017 by studio Larva Labs, are some of the world’s most iconic and valuable NFTs that have become a leading visual symbol of the global NFT movement. Their status in the crypto ecosystem, and more recently the fine art world, has evolved into a signifier of visual identity for their holders. The present group of 104 CryptoPunks to appear at auction were acquired together in a single blockchain transaction by anonymous collector “0x650d.” This stand-alone acquisition connects each of the 104 Punks with the same provenance—a wallet that currently represents more than 1% of the entire CryptoPunks collection— and ascribes unique value to the group as one of the largest Punk collections held by a single wallet. The buyer behind 0x650d will continue with this convention when the 104 Punks are sold together as a single lot at Sotheby’s.

For the auction, Sotheby’s will accept cryptocurrency, with the winning bidder having the option to make final payment in Ether (ETH), Bitcoin (BTC), USD Coin (USDC) or in fiat currencies—all cryptocurrency transactions are subject to applicable laws and regulations. The Sotheby’s auctioneer for the sale will also announce bids live from the New York saleroom in Ether (ETH) cryptocurrency alongside U.S. dollars, following the paradigm-shifting move in November when Banksy’s Trolley Hunters and Love Is In The Air (2006) were both offered with real-time cryptocurrency bidding.

Preceding the live auction on 23 February, Sotheby’s will host a special live panel discussion on the history of NFTs and CryptoPunks, focusing on how Punks have gained mainstream recognition, with notable celebrity collectors such as JAY-Z and Jason Derulo adopting Punks as profile pictures. The panel will be livestreamed from Sotheby’s New York saleroom and feature speakers to be announced at a later date. An exhibition will take place at Sotheby’s New York galleries 18 – 23 February, as well as a virtual exhibition at Sotheby’s HQ in Decentraland.

Michael Bouhanna, Sotheby’s Co-Head of Digital Art, commented: “CryptoPunks are the original PFP series that created the template for other NFT projects that have followed, and which helped propel NFTs to the global stage as one of the most recognizable visual styles that have become synonymous with the digital art movement. To offer a group of 104 CryptoPunks as a single lot is a monumental occasion, and one that we are excited to present as a first-of-its-kind evening auction. Never before has there been a dedicated auction presenting NFTs on this level, and we can’t wait to invite the NFT and crypto art community to participate in this special sale.”

PUNK IT! 104 CRYPTOPUNKS
Larva Labs launched CryptoPunks in 2017 as a series of 10,000 24 x 24, 8-bit-style algorithmically generated avatars, each with their own distinct characteristics in which no two are exactly alike. The signature pixelated style of CryptoPunks characterizes the early NFT aesthetic and is now a symbol of the meteoric rise of the NFT movement. Inspired by punk spirit, CryptoPunks are reflective of the crypto-anarchist philosophy that defined early Ethereum culture. At the vanguard of digital art, Punks challenge the traditional perspective of artistic production, as well creating a whole new audience for collecting art with digitally native collectors.

When the experimental CryptoPunks were released on the Ethereum blockchain nearly five years ago, the collection became one of the Ethereum networks earliest NFT projects, and it also inspired the ERC-721 standard that is used for much of today’s digital art and collectibles. As the foremost avatar project in the crypto and NFT community, CryptoPunks are widely regarded as the first PFP (profile pic) collection that popularized the standard for some of the most successful NFT projects to date. As such, CryptoPunks embody the philosophies of pseudonymity, community, and tradability that are essential to the blockchain ecosystem, and also represent the technology’s elegant simplicity.

Each of the 10,000 Punks has a unique set of attributes, with anywhere from 0 to 8 distinguishing characteristics, which were ascribed by the algorithm that defines their visual style. Among the 10,000 Punks, there are only 8 Punks with no attributes at all, which have been dubbed the ‘Genesis Punks,’ while CryptoPunk #8348 exists as the only one to boast a full set of eight features - donning a top hat and classic shades, puffing a cigarette through his buckteeth and big beard whilst also sporting an earring and a mole.