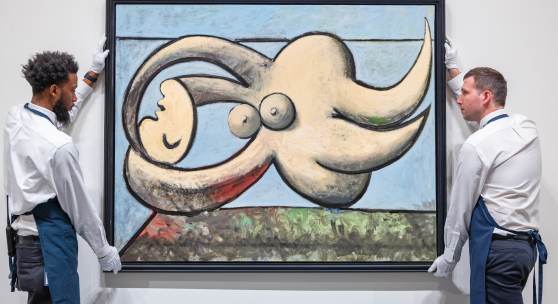 Femme nue couchée A Monumental Achievement in Picasso’s Oeuvre and the History of Portraiture, Is Poised to Achieve in Excess of $60 Million

"Picasso’s portraits of his golden muse Marie-Thérèse are undeniable hallmarks of 20th century art. When unveiled at his career retrospective in 1932, this cycle of monumental works scintillated with their rapturously romantic and sensuous depiction of Picasso’s heretofore sequestered mistress. A radical departure from tradition, this striking painting is at the same time a deeply lyrical ode to the artist’s unbound desire for Marie-Thérèse; with her fin-like, endlessly pliable limbs, the portrait continues to enchant as it perfectly captures Picasso’s muse as the ultimate expression of his genius.”

Brooke Lampley, Sotheby’s Chairman and Worldwide Head of Sales for Global Fine Art NEW YORK, 7 April 2022 – Painted in April 1932, 90 years ago to the month, Femme nue couchée is one of Pablo Picasso’s most monumental and uninhibitedly sensual portrayals of Marie-Thérèse Walter. Appearing at auction for the first time, the large-scale painting is poised to achieve in excess of $60 million at Sotheby’s Modern Evening Auction on 17 May, making it one of the most valuable portraits of Marie-Thérèse Walter ever offered at auction.

Marie-Thérèse was the inspiration for many of Picasso’s greatest works, with 1932 - the year in which he was finally able to give full painterly voice to his passion - widely regarded as his ‘annus mirabilis’. So extraordinarily was Picasso’s output that year, an entire museum exhibition has been dedicated to it (“Paris 1932”, at Tate Modern in 2018). And while the works from this moment stand out for their creativity and their joyous mood, what perhaps marks them out most of all is the intensity of desire that underpins them. (In fact, the French leg of exhibition at the Musee Picasso was called “Paris 1932: année erotique”).

But of the many portraits Picasso painted of Marie-Thérèse in that year, this particular image stands out: it is a uniquely compelling composition that is radically different, both from anything else in his oeuvre, and from the broader art historical tradition of the female reclining nude. In this work, Picasso evokes Marie-Thérèse with the strong and sensuous fin-like limbs of a sea-creature. Though he would go on to render subsequent lovers in animalistic form, the allusion to the sea here is significant: Marie-Thérèse was also an avid and accomplished swimmer whose powerful, athletic grace in the water was a source of constant fascination for Picasso (something that was perhaps all the more beguiling for him, given that – for all the time he spent on the beach as a child and subsequently – he in fact he never learned to swim). In addition to which, the headiest days of their blossoming relationship were spent by the sea: in the summer of 1928, Picasso took his then-wife Olga and son Paulo to the seaside at Dinard. Unbeknown to them, he also installed his then-still-secret-lover Marie-Thérèse in a holiday camp nearby, ‘eloping’, whenever possible for secret romantic encounters by the sea.

Furthermore, a lover of the sea (‘I am a child of the sea; I long to bathe in it, to gulp down the salty water’) and an avid film goer, Picasso may well have been influenced in this composition by Jean Painlevé’s 1928 surrealist masterpiece, La Pieuvre, “a captivating love letter to one of nature's most intelligent and enigmatic creations.”

Building on the lineage of the reclining nude in art history, Picasso’s Femme nue couchée offers a daring new take on the tradition, upending naturalism for the biomorphic forms of Surrealism and a curvilinear approach derived from his simultaneous sculptural practice, which would prove highly influential to generations of artists to come.

“As one of the star highlights of Tate Modern’s world-class exhibition devoted to 1932 as a pivotal year for Picasso, Femme nue couchée is a ground-breaking, extraordinarily sensual work that remained within the artist’s estate for decades before its acquisition directly from the family of the artist . Marking the first time this painting will appear at auction, our Modern Evening Sale will be a defining moment in solidifying 1932 as one of Picasso’s most critically important and sought-after periods.” Helena Newman, Sotheby’s Worldwide Head of Impressionist & Modern Art

“There were many notable years in the long, dramatic career of Pablo Picasso, but 1932 stands out as particularly momentous. In this ‘year of wonders,’ Picasso produced some of his most iconic images of Marie-Thérèse, and here she is presented with a potent mix of sensuality and youthful naivety that heralds a major creative turning point for Picasso. As Picasso remains at the pinnacle of the art market, his portraits of Marie-Thérèse are the most desired and defining works of his entire oeuvre, and Femme nue couchée is one of the most exceptional to ever come to auction.” Julian Dawes, Sotheby’s Head of Modern Art, Americas