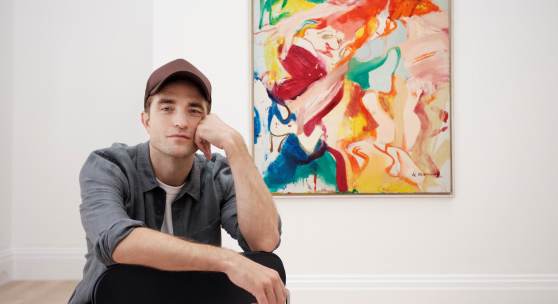 “Curating this group of paintings has been a really exciting process and an honor for me. To be able to experience and have a dialogue with these works according to my taste–and to place massive titans of 20th-century art next to living artists–has been really satisfying. As an actor, I’ve always felt a certain amount of synesthesia between different art forms and being able to connect them together—whether that is a sculpture or a song or an acting part, all at the same time. Acting has made me realize that there is an interconnectedness between all art forms, and it made the process of curating the sale a fascinating and fun experience for me.” -Robert Pattinson

NEW YORK 7 SEPTEMBER 2022: Celebrated actor Robert Pattinson will curate the latest edition of Sotheby’s Contemporary Curated auction, selecting an edit of six superlative artworks from the sale that personally resonated with him and speak to his own tastes in art. Pattinson’s selection spans a variety of media, from sculpture to painting to collage, and mixes established names, such as Richard Serra and Willem de Kooning with rising stars such as Genieve Figgis and Lynette Yiadom-Boakye, to present a kaleidoscopic vision of contemporary art, from post-war to today. The live auction will take place at Sotheby’s New York on 30 September, with an exhibition on view from 23 - 29 September.

Speaking to his curatorial process and his own personal tastes in art, Pattinson remarked: ‘“What I look for is when a piece has its own language. It doesn't necessarily feel like it just exists for its own sake and has a presence that hums with a bit of life. It has the ability to communicate with you on a kind of primordial level. I sort of sway between things that feel very profound and cosmic and alien. Then even on the other side, I like subversive, naughty, slightly dangerous stuff as well…”

Pattinson’s advice for collectors is: “Only acquire pieces that you're going to love, no matter what. Just having something which you're going to keep for the rest of your life is probably the best idea.”

Since 2013, Sotheby’s Contemporary Curated Auctions in New York, with editions in London, Milan, and Hong Kong, have invited an influential figure from fields as diverse as music, business, fashion, film, and culture to specially curate a group of works by the most sought-after post-war and contemporary artists that showcase their unique taste and interests. Previous curators include Swizz Beatz, Margherita Missoni, Oprah Winfrey, Steve Aoki, Jay Chou, Ellie Goulding, Kim Jones, and Cynthia Erivo among others. Anchored by exceptional works of art, each tastemaker adds a unique editorial point of view to each sale.

Willem de Kooning
Untitled, 1964
Estimate: $1,800,000 - $2,500,000
Created in 1964, Untitled coincides with de Kooning's permanent relocation from New York City to East Hampton, a move that would rejuvenate his practice and usher in a remarkable change in his artistic output for the remaining three decades. The piece epitomizes this shift and the artist’s balance between figurative and abstract forms; combining the physicality of action painting with de Kooning’s signature use of layers of oil to convey fleshy shapes and organic contours.

“De Kooning can capture so much energy, and this work feels incredibly fresh, present, and exciting. Looking closely, it is incredibly sensual and quite tasty. At this time de Kooning is still using the same set of tools, but he's trying to create some kind of new form using the same framework as before. It represents an interesting period of transition.” - Robert Pattinson

Richard Serra
Rotation #9
Estimate: $200,000 - $300,000
Produced throughout his career, Richard Serra’s works on paper capture the dynamism of the artist’s monumental site-specific steel sculptures. The artist viewed drawing as an independent artistic endeavor that augmented his work in sculpture, with his works on paper equally as engaged with his interest in dual experiences of weight and lightness, gravity and agility.

“I love sculptors' sketches. There's an energy to this work, a kind of dynamism and Serra is just great at capturing movement. Up close, it's just a completely different thing with an enormous level of detail to it. I love the shape of it, and it feels so much more dense and intricate, but still holds a lot of energy.”- Robert Pattinson

Lynette Yiadom-Boakye Old Rope
Estimate: $100,000 - $150,000
Old Rope is an elegant portrait in Lynette Yiadom-Boakye’s fantastical style in which the artist removes her subject from their surroundings and leaves the sitter’s identity open to the imagination of the viewer. Painted in 2006, this work is a rare example of Yiadom-Boakye’s early work, which are among the artist’s most highly sought-after. Works painted before 2012 have achieved the artist’s top three highest auction prices.