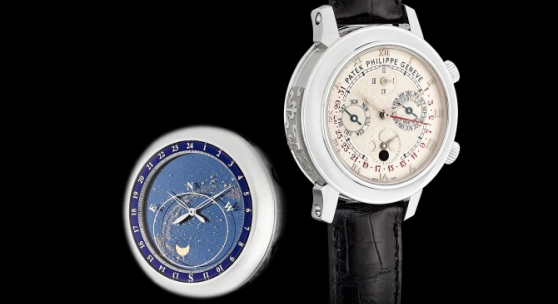 The Timepiece is One of Twenty-Five Exceptional Offerings from an Important Private Asian Collection, Expected to Achieve in Excess of HK$34m/ US$4.4m

And Rare and Complicated Masterpieces by Patek Philippe and Rolex

Sotheby’s auction of Important Watches on 5 October 2022 will offer a remarkable collection of twenty-five timepieces from an Important Private Asian Collection, the star highlight of which is Patek Philippe’s coveted Sky Moon Tourbillon 5002 -- widely recognized as one of the most important watches to be manufactured in modern history (est. HK$10m – 20m / US$1.3m – 2.6m). The auction, encompassing over 200 timepieces, will also feature a selection of Nautilus’ retailed by Tiffany & Co., innovative creations from the most sought-after independent watchmakers, extraordinary Patek Philippe minute repeaters and modern dress watches, as well as rare examples of Rolex sport watches and many more. Following our record-breaking sale series for Sotheby’s Watches back in April, we are thrilled to kick-start the autumn auction season here in Hong Kong with some of the finest and rarest timepieces one could ever find in the market. The offering in this sale encompasses all the wonders of horology, curated not only for seasoned collectors, but catering to the demands of young watch lovers – particularly those aged forty and under -- whom accounted for 67% of total bidders in our April sale.

Property from an Important Asian Collector
Sotheby’s is honoured to present 25 exceptional timepieces from an Important Private Asian Collection, carrying a combined estimate in excess of HK$34m/ US$4.4m. The connoisseur started building their collection in 2018, with important acquisitions of minute repeaters, limited editions and double signed pieces of the prominent models from the most distinguished brands.

Widely accepted as the most important wristwatch manufactured this century, the Sky Moon Tourbillon Ref.5002 was Patek Philippe’s most complicated wristwatch at launch and is the brand’s first creation that features a double dial.

Bearing twelve complications on two dials, this mechanical wonder was inspired by the Star Calibre 2000 pocket watch featuring a complex sky-chart, which Patek Philippe miniaturized it to fit into a wristwatch. Such is the complexity of the 686-part movement, including a tourbillon adjusted to run within a high precision rate of -2/+1 seconds maximum daily variation. With astronomical indications including a retrograde perpetual calendar, quarter moon phases, the meridian passage of Sirius (the brightest star in the sky), the age and angular motion of the moon plus sidereal time and a celestial chart of the northern hemisphere and a horizon ellipse, the 5002 exemplifies the impact astronomy has made on the advancement of human civilization.

The piece is further distinguished by its rarity, with only two examples manufactured each year – making it prized amongst collectors as a trophy timepiece.

Considered by collectors to be one of the last classic complicated wristwatches by Patek Philippe, the reference 5016 was the brand's most complicated watch ever produced, until surpassed by the Sky Moon Tourbillon in 2001. It inherits a similar case design from the reference 2499, and within a case of only 36 mm, it incorporates three complications, namely the tourbillon, perpetual calendar and minute repeater. The watch also features an additional fan-shaped retrograde date.

During the substantial production run of the reference 5016 from 1994 to 2010, flavourful varieties can be found for the reference. The present example is configurated with a platinum case and a silvered dial set with Breguet numerals, preserved in wonderful condition.