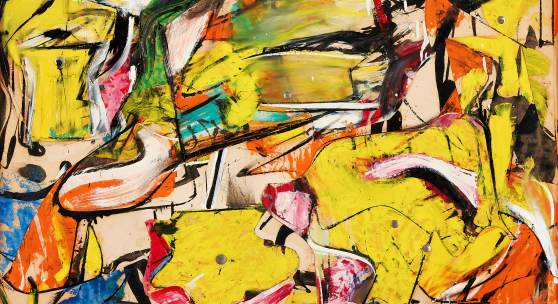 “David Solinger was extraordinary - as a collector, as a museum trustee, as an artist, and a friend to artists, as a raconteur, as an attorney. For decades, he was at the center of the art world of New York, at a time when New York itself was becoming the center of the art world as a whole.”
FRANK ROBINSON, DIRECTOR EMERITUS OF THE HERBERT F. JOHNSON MUSEUM AT CORNELL UNIVERSITY AND FRIEND OF DAVID AND BETTY ANN BESCH SOLINGER

“There is great art, and there is great art that tells a story. Each work in the Solinger collection has a story to tell, and together they tell the narrative, not just of the art scene at one of the most fascinating moments of its evolution, but also of the man who – reliant entirely on his own, highly-honed eye – singled them out and brought them together. David Solinger was a collector in the truest sense, someone for whom art was a consuming passion. Every work in this collection was loved and lived with since the moment it was acquired. Now, those same works come to market with the abundancy of freshness that today’s collectors crave.”
OLIVER BARKER, SENIOR INTERNATIONAL SPECIALIST, CONTEMPORARY ART, AND SOTHEBY’S CHAIRMAN, EUROPE

NEW YORK, 29 SEPTEMBER 2022 – David M. Solinger (1906-1996) was many things: a highly successful lawyer, among the first to specialize in advertising law, and legal representative to a number of leading artists; a transformational force as President of the board of the Whitney Museum of American Art (the first person from outside the Whitney family to hold this position); a highly engaged amateur artist, whose confrontation with the challenges of painting brought him closer to the art and artists of his day; an abundantly generous philanthropist, who donated important works to Cornell University (his alma mater), the Museum of Modern Art, the Whitney Museum, the Metropolitan Museum of Art, the Solomon R. Guggenheim Museum, Smith College and others; and – not least – a collector in the truest sense.

This fall, across a series of sales in New York and Paris which will open with a dedicated evening sale in New York on November 14, Sotheby’s will offer some 90 works from David Solinger’s collection. Estimated in excess of $100 million, they together present a precise vision of the art created on both sides of the Atlantic in the post-war years. Established European artists such as Pablo Picasso, Alberto Giacometti, Joan Miró, Jean Dubuffet, and Paul Klee, take their place alongside a younger generation of rising stars in Paris, including Pierre Soulages, Nicolas de Staël, and Georges Mathieu, and their leading American contemporaries such as Willem de Kooning, Franz Kline, Alexander Calder, and Adolph Gottlieb.

At the same time, the coming to market of this exceptional collection affords a rare glimpse into the mind and approach of one of the leading collectors of his day. During his lifetime, David Solinger gave two extensive interviews, one to Columbia University and one to the Smithsonian, the contents of which paint a captivating picture of someone who relied on his own eye and the confidence of his convictions; who approached the art of collecting from the standpoint of an artist, and for whom looking at art, and owning it, was both a tonic and a passion: “I’ve come home at night exhausted from some activity or other and flopped into a chair and just looked at the pictures in the room and I find myself revived. The thrill of looking at a great picture, either for the first time or a picture that I have seen again and again, is a great tonic. If it’s a good picture, it often has a way of revealing itself slowly… Pictures that grow on one slowly are frequently the best pictures.”

DAVID SOLINGER: ARTIST, ART LOVER AND ‘SELF-MADE’ COLLECTOR As David Solinger describes, “the vast majority of [his] collecting was done in the early fifties.”6 For him, art, and the idea of collecting it, came relatively suddenly, born – almost unexpectedly – of a brief encounter with a friend soon after his return from duty in the war. That friend had just enrolled for art classes at YMHA and Solinger decided to do the same. From that grew a life-long passion for painting: “I became not a Sunday painter, but a summer painter. I would take my vacation by going off to paint, much to the amusement of some professional artists who couldn’t understand how it could be a vacation for me to spend six or eight or ten hours a day painting.”7