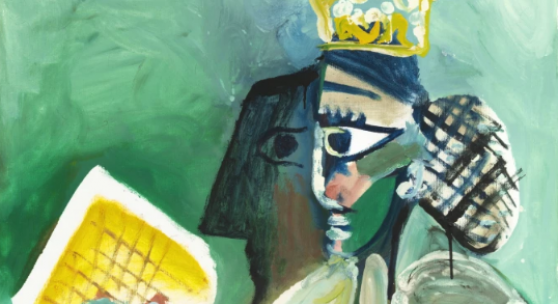 This Autumn in Hong Kong, for the fourth consecutive season[1], Sotheby's will once again present an exceptional work by Pablo Picasso in Asia. Making its auction debut, and unseen in public for more than thirty years, Femme assise à la galette des rois - a loving portrait of the artist’s second wife, Jacqueline Roque - will lead Sotheby’s Hong Kong Modern Art Evening Auction on 7 October with an estimate of HK$60-80 million / US$7.7-10 million.

Picasso first met Jacqueline in 1952 at the Madoura pottery studio in Vallauris in the South of France; she quickly became his lover and muse and would remain by his side right up until his death in 1973. No other figure looms larger in Picasso’s life and art than Jacqueline - of all the women associated with Picasso, it was Jacqueline who would feature most often as his subject. Her legendary features first appeared in Picasso’s output in 1954 and the following two decades, which art historian John Richardson called “l'epoque Jacqueline”, reveal the essential role she played in Picasso’s late artistic career.

In Femme assise à la galette des rois, although the sitter’s image has been partially abstracted, the dark eyebrows, the beautifully curved eyelids and the firm, straight nose are unmistakably those of Jacqueline. Picasso depicts his wife as an all-seeing classical beauty, invested with a sense of regal authority with a crown placed upon her head. Jacqueline is also seen holding the galette des rois (King Cake), a cake traditionally baked to celebrate the Epiphany, containing a small charm or figurine inside bestowing the moniker of “king for a day” on whomever finds it. This charming detail offers a personal insight into the life of the artist and his muse, and evokes an atmosphere of playful celebration that encapsulates their life together as a couple.

The vibrant palette of green, black and gold, and the comparatively formal nature of Jacqueline’s posture, reflect the influence on Picasso of Old Masters such as Velázquez. Throughout the 1960s, Picasso turned repeatedly to the reinterpretation and investigation of the artists of the past that he revered, a process through which he reaffirmed his lineage to some of the greatest painters in the history of art. These achievements were made possible by the loving company of Jacqueline who inspired many of his most significant compositions of the period.

Femme assise à la galette des rois comes to auction from a Swiss private collection and has remained in the possession of the same family for over 50 years. In 1988 (to 1989), the painting was included in Picasso’s major retrospective at the Moderna Museet in Stockholm. Now, some three decades later, the public will once more have a long overdue opportunity to appreciate Picasso’s visually stunning painting of the women who meant so much to him.