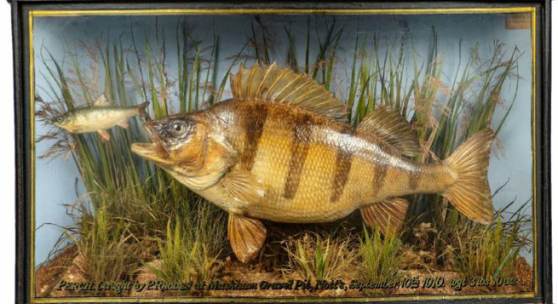 Summers Place Auctions will hold its regular Evolution Auction on 22 November 2022. This year, the sale will include the eclectic collection of taxidermy from the well-known Flower Pot pub in Henley-on-Thames. The collection had been assembled by the landlord in the late 80s and 90s, but he has now retired and is selling his famous collection. Due to its close location to the Thames, it is no surprise that many of the 88 lots are indeed a wide variety of fish, but other local animals are also represented.

Most of the taxidermy is from the early 20th Century, but there are some rare Victorian fish cases included as well as some more modern ones from the 1990s. Many of them by the famous taxidermy business of Cooper & Sons, which was later run by Griggs, and others by well-known taxidermists like Homer.

The business that became known as Cooper and Sons is the most famous name in the history of fish taxidermy, and is recognised throughout the world. The company lasted for over 100 years and three generations with John Cooper (1807 -1872) setting it up and his son also named John (1840 - 1916) continuing the high standards which meant that the company flourished. On his death his own sons took on the business, but the effects of World War I led to a decline in business opportunities and it was eventually being taken over by William (Bertie) Griggs (1884 - 1953) and later his son Lionel Griggs (1915 -1984).

Bertie Griggs is usually regarded as the man who took antique fish taxidermy to its highest level, and his work today is highly sought after, as is that of his son Lionel. Although in business under his own name for many years, Bertie is best known for the fact that he took over the famous old firm of Cooper's during the early 1930s. Such was the prestige of the Cooper name that although Bertie Griggs now owned the company he continued to label his cases 'J. Cooper and Sons' even though everything produced was his work. After Bertie's death during 1953, his son Lionel continued the business using the same high standards that he had learned from his father. The business lasted for several years producing top quality cases but by 1960 taxidermy was in the doldrums, and in 1962 it was decided to close the doors forever.

Although many fish taxidermist rose to prominence, it was William Homer (1869 - 1957) who created the third of the antique companies that produced work that is most highly sought after today. His products carry a distinct style that results in the majority of the cases he made being surprisingly light in weight.

The celebrated collection turned the Flower Pot Inn into a mecca for anyone interested in fishing as it so close to a beautiful stretch of the River Thames and its extensive collection of preserved fish trophies with several YouTube videos featuring the collection, including this one: https://youtu.be/dmcjQ1xF2Es.