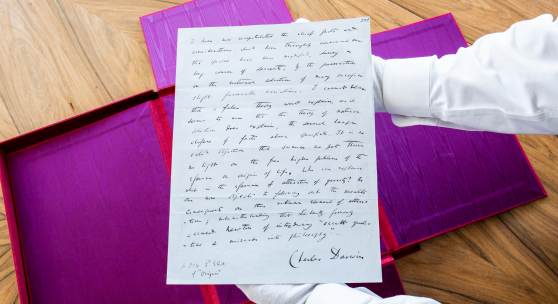 NEW YORK, 23 October 2022 – Charles Darwin’s On the Origin of Species (1859) is inarguably one of the most influential texts ever published. Much more than just the basis of evolutionary biology, On the Origin of Species reshaped not only scientific thought, but also the very foundation of humanity’s understanding of life on earth. Today Darwin’s theories are a pervasive and transformative force driving everyday life.

An extremely rare manuscript containing a passage from Charles Darwin’s revolutionary text will be offered with an estimate of $600,000 - $800,000 at Sotheby’s this November, marking the most significant autograph manuscript by Darwin to ever appear at auction. The manuscript leaf will be sold during Age of Wonder (25th November – 9th December), an auction dedicated to exploring the intersections of 19th century science and culture. Alongside the leaf, the sale will feature other extraordinary works, such as a first edition of On the Origin of Species (est. $300,000-$400,000), and the incredibly scarce “On the Tendency of Species to form Varieties” paper, by Charles Darwin and Alfred Russel Wallace (est. $250,000 - $350,000).

While some of Darwin’s notes and manuscript leaves have survived over the last hundred or more years, he was known to obsessively revise his publications, often discarding pages from working drafts and treating them as scrap paper, making any autograph manuscript extremely rare. The present document was previously mischaracterized as a leaf from the working draft of the third edition of On the Origin of Species but was in fact a note carefully prepared by Darwin in response to a request from Hermann Kindt, the editor of the “Autographic Mirror.” Kindt had written to Darwin, soliciting a sample of his handwriting for the purpose of reprinting it in his magazine, which focused on the preeminent figures of the age. Darwin gladly answered and provided him with the present leaf, a rare gesture from a man with notoriously inscrutable handwriting, and who would often sign his name in abbreviated letters such as Ch, Ch. Darwin or just C. Darwin.

The text Darwin chose to write to Kindt was in essence his definitive statement—the passage most closely associated with himself and his legacy. He writes, “I have now recapitulated the chief facts and considerations which have thoroughly convinced me that species have been modified, during a long course of descent, by the preservation or the natural selection of many successive slight favourable variations.” He confidently continues with assertions that only appeared in the third, revised edition of On the Origin of Species: “I cannot believe that a false theory would explain, as it seems to me that the theory of natural selection does explain, the several large classes of facts above specified. It is no valid objection that science as yet throws no light on the far higher problem of the essence or origin of life…” The correspondence between Darwin and Kindt dates to the autumn of 1865, four years after the publication of the 3rd edition of Origin of Species, making this document all the more significant as it encapsulates Darwin’s complete thinking on the subject.

The auction of Darwin’s authorized summative statement on his prolific theories follows a tradition of prominent auctions of scientific manuscripts at Sotheby’s, including the highest price achieved for a manuscript leaf from On the Origin of Species, which sold for £490,000; Isaac Newton’s Opticks: or, a Treatise of the Reflexions, Refractions, Inflexions and Colours of Light—the first appearance of Newton's important optical discoveries, featuring his explanation of the rainbow—which sold for $1,330,000, a record for the title; and a letter by Gregor Mendel to his parents—a remarkable rarity by the father of modern genetics—which achieved $300,000.

The online sale will be open for bidding from 25th November – 9th December, with an exhibition at Sotheby’s York Avenue galleries open to the public from 30th November – 8th November.


Sotheby’s To Offer the Most Significant Autograph Manuscript Document By Charles Darwin To Ever Appear on The Market Featuring the Summation of On the Origin of Species Estimated to Achieve $600,000 - $800,000
Sotheby’s Auktionshaus