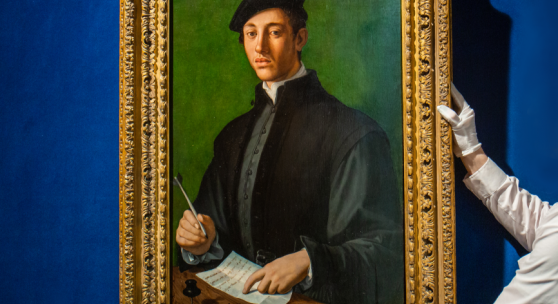 Recently Restituted, the Painting will Now be Sold to Benefit New York Charities

“This extraordinary portrait is one of the most exciting recent discoveries related to the celebrated Florentine artist Agnolo Bronzino. It is remarkable that a painting of this quality, a true masterpiece of 16th-century portraiture, has remained unknown to the scholarly community. Its rediscovery not only brings to light one of the artist’s most beautiful portraits, but also betters our understanding of his youthful activity. Even from very early in Bronzino’s career, his portraits were the most compelling expressions of his dual interests in word and image. As also seen in the recent exhibition ‘The Medici, Portraits and Politis’ at the Metropolitan Museum (2021), this artistic sophistication is typical of Bronzino’s mature period, when he worked at the court of Cosimo I de’ Medici; however, this portrait demonstrates that the same literary and visual conceits underpinned his work even in his youth.”

Carlo Falciani, Art Historian and Professor of History of Modern Art at the Accademia di Belle Arte in Florence.

“We are proud to have been able to reunite this work with its extraordinary provenance, which can be traced continuously from the Seventeenth Century connoisseur Sir William Temple, through the tumultuous WWII years, to the present day. We are especially honored to be able to celebrate the life and legacy of Ilse Hesselberger to whose successors the painting has been restituted by the German Government. Recognized once more as an immensely rare and significant portrait by Bronzino, it will now be sold for the benefit of charity.”

“Discoveries of this caliber come once in a career: Upon seeing this captivating portrait in person for the first time, my colleagues and I were struck by its exceptional qualities. We immediately suspected that we were looking at something much more significant than a work by Jacopino del Conte (the old attribution on this painting.) After unravelling the painting’s history and consulting with scholars, we were thrilled to discover that what we had on our hands was an early portrait by Bronzino that had fallen into obscurity for much of the 20th century. In fact, as one of the artist’s earliest explorations of a genre that would define much of his career, this portrait offers rare insight into Bronzino’s early work. Equally exciting is the possibility that this may be a self-portrait of the artist. Along with my entire team, I am incredibly honored to introduce this alluring and elegant gentleman – a true masterpiece of the Florentine Cinquecento – to a worldwide audience.”