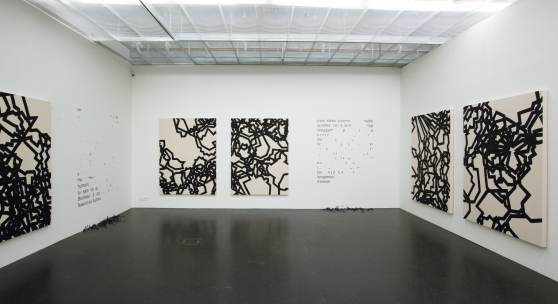 Transformation and memory are the key themes that inform Latifa Echakhch’s oeuvre. As part of the consistent pursuit of her approach, the artist has combined in this exhibition three work groups and individual objects, all dealing with deconstruction and change.

Wall texts that have partially become detached appear alongside imposing paintings featuring networks of tangled lines and scenery flats, disillusioningly seen from behind: fading memories of an individual self, whose unfulfilled hopes have outlasted youthful simplicity, attempts to break free from ascribed identities, and the seemingly endless multitude of definitions of one’s own personality are all simultaneously represented here.

In her work, the artist calls into question the symbolic significance of objects. She experiments with that significance by bringing all sorts of national, cultural, (socio)political and personal influences to bear on the objects and by changing their context, which results in a new freedom of thinking about them. Her own story as a Frenchwoman with Moroccan roots living in Switzerland forms the backdrop for themes that concern all of us.

Biography
Latifa Echakhch was born 1974 in El Khnansa, Marocco. She lives in Martigny, Switzerland.
The artist was awarded the Prix Marcel Duchamp in 2013, followed by the Zurich Art Prize in 2015.
Solo exhibitions of her work have been mounted at the most prestigious venues such as the MACBA Barcelona (2010), the Kunsthaus Zurich (2012) and the Centre Pompidou in Paris (2014). In 2011 she took part in the Venice Biennale and in 2012 in the Biennale of Sydney.
The exhibition at the LENTOS marks the first showing of Echakhch’s work in an Austrian museum and follows her intervention in the Cabinet of Curiosities at Salzburg’s Dommuseum in the summer of 2014.