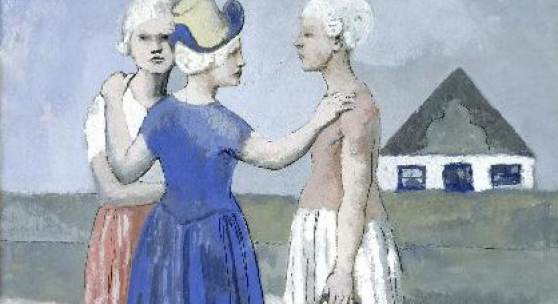 The young Pablo Picasso (1881-1973) had been living in Paris for a couple of years when in 1905 he decided to leave the metropolis and head to rural North Holland. Ensconced in the seaside villages of Schoorl and Schoorldam, he made trips to the towns of Alkmaar and Hoorn. He saw the Alkmaar cheese market, studied windmills and recorded that exotic world in his sketchbooks. He made gouaches of young village women. Now for the first time, all these Dutch works are on show, 111 years later, at Stedelijk Museum Alkmaar, near the area where he painted and sketched them.

Picasso in Holland: Les belles Hollandaises – running from 7 June to 28 August 2016 – features several unique artworks on loan from museums abroad and rarely-shown documentary material. The idea grew from a recent gift: the wooden café chair on which the Spanish master reportedly sat and worked. Nothing unusual, and yet unique because of the fame of the man who used it.

Dutch work
Picasso in Holland features works from the collections of the Musée Picasso Paris and the Queensland Art Gallery in Brisbane. Loans include two sketchbooks - a collection of journal-like drawings full of creativity - and two magnificent gouaches of village women: La belle Hollandaise and Les trois Hollandaises. Picasso may have bought one sketchbook in Alkmaar.
The 24 year old Picasso portrayed ordinary locals, brothel customers, traditional Dutch farmhouses, windmills and the historic town centres of Hoorn and Alkmaar. He also worked on the compositions of his Parisian paintings. He would paint in his room that neighboured the North Holland Canal.

That waterway also appears in Les trois Hollandaises. The farmhouse in the background is typical of the region. As is the West Frisian cap worn by the young village woman in the gouache of La belle Hollandaise. Her nudity is remarkable. It would have been highly unusual for a model in a rural village to pose in the nude.

Where did Picasso go and whom did he meet?
Apart from these priceless works, the exhibition also includes cultural historical material such as photos, postcards, letters and anecdotes. The only surviving snapshot of Picasso’s visit is also displayed. It shows the artist with his friend Tom Schilperoort’s in his holiday home in Schoorl. In between we see Nelly Timmer: she cleaned the house and was a girlfriend of Schilperoort.

A map of the area shows the places that Picasso visited. Even the people he mixed with have been identified. Besides Schilperoort and Nelly Timmer, these include Dieuwertje de Geus, daughter of the postman in whose house he rented a room after he left his friend’s holiday home. These lodgings stood beside the ’s Lands Welvaren café in Schoorldam, now called the Hof van Schoorl. That is where the Picasso chair comes from. It was stored in the attic at the home of the proprietor’s daughter. Her son bequeathed it to the museum last year. Away from Paris The exhibition also reveals Picasso struggle with his unfinished Paris work while he was in North Holland. His diaries contain at least fifteen studies for the Marriage of Pierrette (1905). He also experimented with the background for the Family of Saltimbanques (1905). Back in Paris, he painted a kind of desert behind the acrobats, inspired by the dunes of Schoorl. Being away from Paris – if only for a few weeks – enabled Picasso to develop his style.

Publication and documentary
The exhibition is accompanied by a publication produced by Uitgeverij Waanders & de Kunst with contributions from Marilyn McCully, Gerrit Valk and others. Chris Houtman created a short documentary about Picasso’s summer in Holland, which is shown at the exhibition. Picasso in Holland is developed jointly with Regionaal Archief Alkmaar.