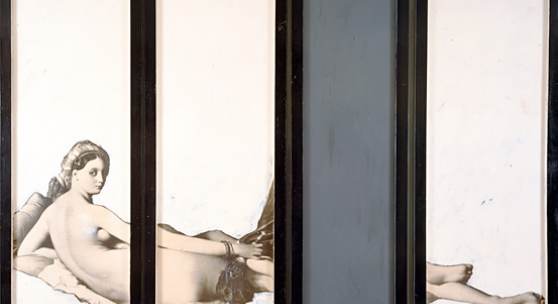 From 23 April to 19 September 2016 the Peggy Guggenheim Collection presents Imagine. New Imagery in Italian Art 1960-1969, curated by Luca Massimo Barbero. This fresh perspective on European post war art looks at figuration in the Italian avant-garde in the 1960s.

In Italy during the 1960s, at the height of the economic boom, artistic experimentation flourished at an unprecedented pace and intensity. The goal was to create a new vocabulary of signs and images capable of interpreting the vitality of contemporary culture and society. This exhibition draws on the richness of Italian art production in those years. The theme, the leitmotif, of the exhibition is how the figured image, transient and transformed, departing from the monochrome, served to construct a new language of representation in a little known phase of Italian art history.

The exhibition, in a tightly curated sequence of galleries, lays out the multiple lines of research of several of Italian artists who, emerging from the zeroing of the neo-avant-garde, reconstituted a new world of images, figures, and narrative. On view are works by artists such as Franco Angeli, Mario Ceroli, Domenico Gnoli, Giosetta Fioroni, Tano Festa, Fabio Mauri, Francesco lo Savio, Michelangelo Pistoletto, Mario Schifano, Giulio Paolini, Jannis Kounellis, Pino Pascali.
With no claim to definitiveness, Imagine. New Imagery in Italian Art 1960-1969 sets out to supersede, from the vantage point of today, the so-called ‘orthodoxies’ of the time, freeing visual research from adherence to movements or subordination to category. An intense sequence of emblematic works captures the vitality of that brief period of time, a mere nine years, and uncovers, by diversity and assonance, in an unceasing process of exchange and dialogue, that melting-pot of visual art, in a process of ‘becoming’ which gave rise to the schools and movements of future avant-gardes.