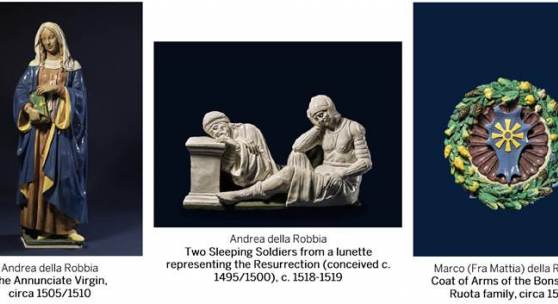 NEW YORK, 19 SEPTEMBER 2016 – Sotheby’s is pleased to announce Glazed: The Legacy of The Della Robbia, a selling exhibition in collaboration with art dealer and collector, Fabrizio Moretti, to be installed in our New York headquarters from 21 October through 18 November 2016. The exhibition will showcase 19 instantly-recognizable sculptures by the Della Robbia family of Italian master sculptors, exploring both secular and religious themes of Renaissance Florence.

Known for their distinctive colors and ingenious glazing techniques, the Della Robbias were grand innovators from the second half of the 15th through the 16th centuries in Italy. The family legacy began with Luca della Robbia, who was ranked among the top artists of the time alongside Michelangelo, Leonardo and Botticelli. He secured commissions from the wealthiest families throughout Italy, while creating works for the Florence Cathedral and the Pazzi Palace. His techniques and legacy were carried on by several members of his family including his nephew, Andrea della Robbia, and great-nephew, Giovanni della Robbia – all of whom are represented throughout this exhibition.

The show falls at a time of great interest in the Della Robbia family. The Boston Museum of Fine Arts exhibition of Della Robbia: Sculpting with Color in Renaissance Florence has seen a surge of attention and critical acclaim. In January 2012, Sotheby’s established the current auction record for any work by Andrea Della Robbia, when An Important Pair of Italian Glazed Terracotta Relief Portraits of Youths sold for $1.7 million. In January 2015, Sotheby’s offered another selection of Mannerist and Renaissance works assembled by Fabrizio Moretti, including Giovanni Della Robbia’s Saint Michael the Archangel that fetched $413,000 – multiples of its $90,000 high estimate.

Margaret Schwartz, Head of Sotheby's European Works of Art Department in New York, said: “I am so honored that Fabrizio Moretti approached Sotheby’s to collaborate on this selling exhibition. Fabrizio brings his passion for the work of this exceptional family of artists to the public, with the goal of showcasing just how contemporary a 500 year-old work of art can look and feel. We are excited to celebrate this ingenious family and to present this group of Renaissance sculpture. The Della Robbias’ influence continues to be felt today, through their radiant surfaces, dazzling color and simplicity of design that appeals to contemporary artists and collectors alike.”

Fabrizio Morretti, President, Moretti Fine Arts, commented: “I am thrilled to be collaborating with Sotheby’s once again, and in particular on works by the Della Robbia, which have been a lifelong passion of mine. At a young age, I was captivated by the family, who made a unique contribution to the arts and remains among the most universally-recognized of all Renaissance artists. It is my hope that through this exhibition the Della Robbia sculptures will resonate with our contemporary taste for color and bold design.”