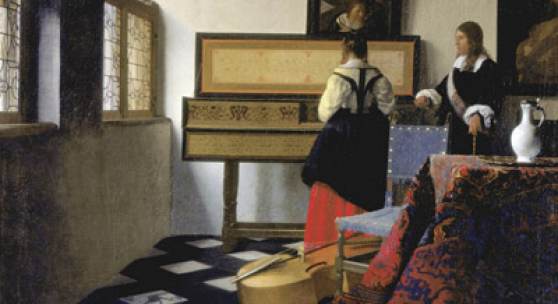 The Hague, 27 September 2016 - A royal visit from Great Britain: from 29 September 2016 to 8 January 2017 the Mauritshuis in The Hague will exhibit a selection of the most important Dutch genre paintings from the British Royal Collection. The renowned Royal Collection, held in trust by Her Majesty Queen Elizabeth II, includes highlights by famous painters such as Gerard ter Borch, Gerrit Dou, Pieter de Hooch, Gabriël Metsu and Jan Steen. The highlight of the exhibition is ‘The Music Lesson’ by Johannes Vermeer.

Emilie Gordenker, Director of the Mauritshuis: ‘Never before has such a large group of genre paintings from the British Royal Collection been on view in the Netherlands. It is a great honour to have them in the Mauritshuis for the duration of the exhibition.’

The Royal Collection has some of the most important holdings in the world. It owns many paintings of the Dutch Golden Age, and gives pride of place to its genre paintings, scenes that appear to be taken from everyday life. The exhibition At Home in Holland: Vermeer and his Contemporaries from the British Royal Collection introduces the public to the ‘genre painting’, its many forms and the provocative symbolism it often conceals. These works are stunning in their variety, from simple farmhands gathered in an inn to elegant figures in rich interiors. Some of the everyday scenes carry a deeper, often moralistic meaning, which may be explicit or at times concealed. But in all of them, the artists portrayed the characters and their environments as skilfully as possible, which makes them even more attractive.

About the exhibition
The exhibition covers a broad selection of the best Dutch genre paintings from the Royal Collection. It includes 22 paintings from the British Royal Collection and one from the collection of the Mauritshuis, The Young Mother by Gerrit Dou. This painting was part of the British Royal Collection until about 1700, and came into Dutch ownership through King and Stadholder William III. The highlights of the exhibition are Johannes Vermeer's ‘The Music Lesson’ and Jan Steen's A Woman at her Toilet. Also featured are significant works by other grand masters of Dutch genre painting, such as Gerard ter Borch, Gerrit Dou, Pieter de Hooch, Willem van Mieris and Gabriël Metsu.

‘The Music Lesson’ is one of the rare 36 surviving works by Johannes Vermeer. This painting dates from 1660-1662, and shows a woman and a gentleman beside a virginal. Above the instrument hangs a mirror, which reflects the foot of Vermeer's easel. Music is undoubtedly a symbol of love in this painting, and this is confirmed by the Latin motto on the virginal. The painting was acquired by King George III of England in 1762, when it was attributed to Frans van Mieris the Elder. Only later was it recognised as a masterpiece by Vermeer.

Another highlight in the exhibition is a painting by Jan Steen, which dates from 1663. It was once known as A Woman at Her Toilet. It shows a young woman who, judging by the indents above her calves is pulling her stocking off as her eyes meet those of the viewer. As in Vermeer’s painting, the context can be understood as amorous. Such subjects were extremely popular in their day. Steen makes the point that the physical pleasures are transient by showing a skull in the door opening, under a lute with a broken string.

The exhibition At Home in Holland: Vermeer and his Contemporaries from the British Royal Collection is a collaboration between Royal Collection Trust and the Mauritshuis. The exhibition was held at The Queen’s Gallery, Buckingham Palace, London, under the title Masters of the Everyday: Dutch Artists in the Age of Vermeer from 13 November 2015 to 14 February 2016. It has been on display at The Queen’s Gallery, Palace of Holyroodhouse, Edinburgh until 17 July 2016. From Thursday 29 September 2016, the paintings will be on view in the Mauritshuis in The Hague.

Catalogue
The exhibition is accompanied by a richly illustrated catalogue in both English and Dutch, published by Royal Collection Trust, the Mauritshuis and Mercatorfonds. The catalogue was written by the exhibition's curators, Desmond Shawe-Taylor (Surveyor of the Queen’s Pictures, Royal Collection Trust) and Quentin Buvelot (Senior Curator at the Mauritshuis). Masters of the Everyday: Dutch Artists in the Age of Vermeer is currently available in the shop at the Mauritshuis.

Sponsors
The exhibition is made possible with the support of ABN AMRO, the Friends of the Mauritshuis Foundation and the Dutch Masters Foundation.