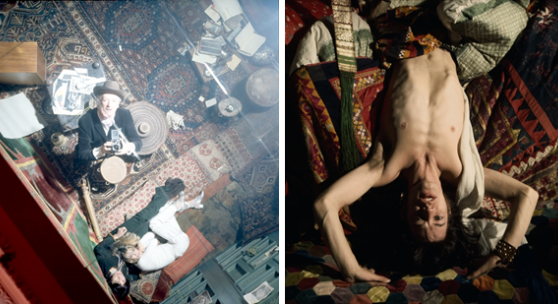 Sotheby’s S|2 gallery in London will unveil a treasure trove of captivating photographs taken by acclaimed photographer and Oscar-winning designer Cecil Beaton taken on the set of Performance, the 1970 British crime drama film. Now considered to be a cult classic, the film seamlessly moves from fantasy to reality, capturing an uncompromising frantic energy akin to a psychedelic whirlpool. The explicit sex scenes, brutal violence and frequent drug-taking were a breakthrough for British cinema, and these elements resulted in Warner Brothers shelving the film for two years before a heavily re-edited version was finally released. The exhibition is Sotheby’s first dedicated sale of Beaton’s photographs and will present fifteen images on offer as limited edition modern platinum prints produced from the original negatives. Open to the public from 25 November until 23 December.                 

Performance was the film acting debut for Mick Jagger of the Rolling Stones. Rarely awed by his sitters, Beaton and Jagger were natural friends, both keenly drawn to the lure of success. The result of this friendship was what Mick Jagger called ‘some nice pictures’. Their second meeting was during the Rolling Stones’ momentous holiday to Marrakech in March 1967, where Beaton’s fascination with the decadence of the band was sparked. Of Jagger he said, ‘he was a Tarzan of Piero de Cosimo... He is sexy, yet completely sexless. As a model he is a natural’. The trip was the first time that Beaton met Jagger’s onscreen love interest Anita Pallenberg, of whom he took a rather more scathing view, remarking that she had a ‘dirty white face, dirty blackened eyes, dirty canary drops of hair, barbaric jewellery’. Pallenberg was in a relationship with Jagger’s bandmate Keith Richards – a fact that was the cause of much friction amongst the group. During what was ostensibly a simulated love-scene in a canopied antique bed, it was widely thought that Jagger and Pallenberg ‘began to make love in earnest’, whilst Richards sat in a car outside the filming location.

Beaton’s photographs define a glittering generation, as he captured from behind his camera lens the great and famous personalities of the 1920s to the 1970s - from eminent artists, to iconic actors to influential philosophers and international royalty. The appeal held by the Swinging Sixties was matchless, and Beaton prided himself on being a past master at bridging the generation gap and spotting new waves in culture. Indeed photographing this generation was a natural progression from the Bright Young Things of his own youth. Sotheby’s is the privileged guardian of this matchless repository of over 100,000 negatives and 9,000 vintage prints from the legendary photographer’s personal collection – a transfer that was negotiated by Beaton in 1977 in order to preserve its role for future generations.