Ai Weiwei's Law of the Journey 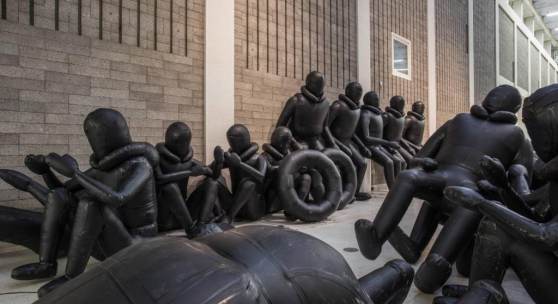 Ai Weiwei, a world-renowned Chinese artist, activist and dissident, has created a monumental installation for the Trade Fair Palace of the National Gallery in Prague, which is the culmination of the artist’s more than year-long concern with the global refugee crisis: a seventy-meter long inflatable boat with larger-than-life refugee figures.

In 2016, the National Gallery in Prague presented in a public space Ai Weiwei’s sculpture series Circle of Animals/Zodiac Heads. This year, the project continues with his new installation entitled Law of the Journey. The largest individual object by this Chinese artist reflects his intense interest in the fate of refugees, which led him to forty refugee camps in different locations across the globe. Designed site-specifically, the monumental inflatable boat with refugee figures will float in the space of the Big Hall of the Trade Fair Palace and will be complemented by Crystal Ball, a large glass sphere mirroring this supernatural object. “When I first came to Lesbos, we found a half sunken boat there. I asked to be taken to it and sent the other people away. I wanted to experience what it was like to be there alone. It was not until then when I felt what it was like to be on a poorly equipped boat, all by myself, as an insect on a leaf in the middle of the lake. In the boat I found a baby bottle and a Bible soaked with seawater. That was when I decided to explore this, to go after all those thoughts that are in my head,” says Ai Weiwei. At the same time, he conceived of the idea to make a documentary film to explore the global refugee crisis. That film, Human Flow, is currently in post-production and will premiere later this year.

As usual with Ai Weiwei, his project prepared for the National Gallery reflects urgent problems of today’s world undermined by conflicts, by political and economic crises, the world faced with inflation of values and moral decline. By making a theme of the refugees confined in their boat and going towards an uncertain future, Ai Weiwei does not want just to confront viewers with an extremely difficult situation of tens of millions of human beings on the run, but also to point out that the theme of the “migration crisis” divides modern society into “us” and “them”.

In addition to this site-specific installation, the National Gallery in the Trade Fair Palace presents other works by Ai Weiwei as part of his exhibition Law of the Journey. Prague hosts the European premiere of Laundromat: Ai Weiwei collected thousands of pieces of clothing, shoes and other items left behind at the evacuated refugee camp in Idomeni on the Greek and FYROM border, which he laundered, ironed and organized into an unusual art installation. At the entrance to the Trade Fair Palace there will be a tall crystal candelabra entitled Traveling Light and the entrance hall will feature Snake Ceiling, a large black-green snake created from 5000 children’s backpacks commemorating the tragic earthquake in southern China in 2008, during which more than 5000 children lost their lives in carelessly constructed schools. Prague will also host his installation entitled With Flowers created during Ai Weiwei’s home confinement, reminding us of the necessity of defending human rights and freedoms.

Prague will also see an adapted version of the exhibition Kneaded Knowledge: The Language of Ceramics, which focuses on ceramics as an artistic medium, co-curated by Ai Weiwei and the Dutch artist Edmund de Waal (first presented at the Kunsthaus Graz in 2016).

Ai Weiwei’s projects will be inaugurated during the traditional launch of the exhibition season in 2017 at the National Gallery in Prague (Grand Opening) on 16 March 2017. The spring exhibition program will include other site-specific installations by the renowned Czech-German conceptual artist Magdalena Jetelová, the “father of ambient music” Brian Eno, photographs of the famous Japanese dancer Min Tanaka, as well as many other artistic projects.