The Beginning of Something Else - Galerie Thaddaeus Ropac 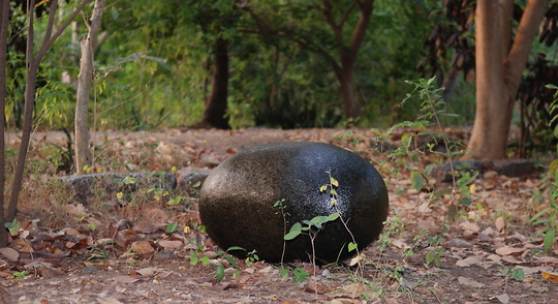 Galerie Thaddaeus Ropac is pleased to present The Beginning of Something Else, an exhibition of new works by Wolfgang Laib.

Six Brahmanda (‘egg of Brahma’ in Sanskrit) will be displayed in the centre of the main space. Carved out of black Indian granite, these egg-shaped sculptures reference the very first work of art Laib created, when he discovered a large black rock in a stone quarry near his home in southern Germany in 1972. A medical student at the time, he had just returned from three months in India. Inspired by everyday and ceremonial objects he had seen there, he carved the stone into a perfect ovoid Brahmanda. This experience led him to renounce a career in medicine and become an artist.

Laib has always been less concerned with innovation or formal development than with the notion of continuity. His oeuvre is not to be approached in a chronological order, but in a cyclical manner, as he uses the same forms and materials regularly. Forty-five years after this seminal gesture, the Brahmanda remains key to understand the artist’s practice. If the shape symbolizes the regeneration of the world, it also challenges the notion of authorship and subjectivity usually associated with artistic creation. Although Laib admits that his work is art, he considers himself as a vehicle for ideas of universality and timelessness that are already present in nature.

As Clare Farrow writes, we often have ‘the feeling that the artist is participating in ancient and universal process, an endless cycle of beginnings and endings.’ Laib constantly aims to restore a specific connection to nature, which, he thinks, has been displaced by science. In his work, the micro often connects to the macro in a way that reconfigures our place in the universe.

Surrounding the central installation, a frieze of 28 large-sized drawings will be exhibited on the walls of the gallery. They were initially inspired by a ritual performed by Shinto priests in the Meiji Shrine in Tokyo for the ceremony of the Praemium Imperiale art prize, which Laib received in 2015. During the ritual priests were dressed all in white at dusk, with burning fires in the courtyard and the moon above in a dark blue sky. Made with white oil pastel on white paper, the drawings show a full moon cycle – a journey through white mountains. When looking at them, the subdued forms progressively liberate an impression of void until they reach a sense of the immaterial: ‘The more you complicate things, the more you lose. In renouncing you achieve more’, Laib says.

Some drawings have texts, much like the poems in Chinese and Japanese paintings. The short quotations are taken from the Upanishads, a collection of ancient Sanskrit texts that contain some of the central philosophical concepts of Hinduism, and from the Tao Te Ching, a fundamental philosophical and religious Taoist text. Quotes from the twelfth-century Persian poet and mystic Rumi can also be found and the last drawing features an old Italian text.

Laib's work is profoundly connected to his experiences in India and Southeast Asia, which first began when traveling with his family as a young teenager. The artist currently lives and works in Germany and India. For his next major artistic project, he is planning to create a colossal Brahmanda in the southern Indian state of Tamil Nadu. He envisions a sculpture, which would be carved out of the mountainside while remaining connected at the bottom, as a permanent monument, commemorating his deep admiration and respect for the country and its culture and traditions.

Wolfgang Laib (born in 1950 in Metzingen) studied medicine at the University of Tübingen before becoming an artist. In 1982, he participated in documenta 7 and in 1986 his first major institutional exhibition was held at the Musée d’art moderne de la ville de Paris. In 1987 his work was presented at documenta 8. He subsequently had numerous solo exhibitions, notably at the Hirshhorn Museum, Washington DC (2002), Dallas Museum of Art, Texas (2002), Haus der Kunst, Munich (2002/2003), Fondation Beyeler Riehen/Basel (2005/2006). His largest pollen piece to date was on view in the atrium of MoMA in New York in 2013. The same year, the artist’s first permanently installed beeswax room opened at The Phillips Collection in Washington, D.C. In 2015, he was awarded the Praemium Imperiale in Tokyo. In 2017, an exhibition of his work was organized at the Secretariat in Yangon, Myanmar. A survey show will take place at the Museum of Modern Art in Lugano, Italy from 3 September 2017 to 7 January 2018.