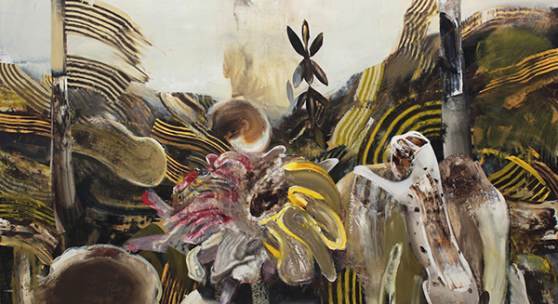 Galerie Thaddaeus Ropac is pleased to announce an exhibition of new works by the Romanian-born, Berlin-based artist Adrian Ghenie.

The title of this exhibition “Jungles in Paris” has been borrowed from the Henri Rousseau exhibition at Tate Modern in 2005-06 (later show at Grand Palais, Paris and National Gallery, Washington). The visual tension created by the juxtaposition of two seemingly disparate environments (the sophisticated urban Paris versus the exotic wild untethered jungle) is the foundation for Ghenie’s new body of work.

Henri Rousseau’s (1844 – 1910) detached treatment of surface composed of flat, juxtaposed and overlapping planes and grids, foreshadowed many aspects of Modernism, have long fascinated Ghenie who regards him as “the first abstract painter”. The self-taught Rousseau had a cult following, greatly revered by many of the avant-garde artistic figures of the time such as Picasso, Brancusi, Delaunay and Apollinaire, who openly admired his uniquely naive paintings.

Ghenie’s fascination with the texture of the subjects and objects that he chooses to paint is as potent as ever in this new body of work. “It is never the motif that interests me but always the texture of my subjects and how the transformation of this texture over time can tells a secret narrative”, says Ghenie.

A vivid palette of turquoises, yellows and greens set against earthy tones of brown, ochre and bone capture the heat and light of the forest or jungle. Finger-like tendrils of vermilion red and cadmium yellow crawl in and over the surface of sophisticatedly composed paintings. Sometimes hidden in the landscape or foliage, wild beasts, strange animals and decaying carcasses shape-shift, in and out of focus. It is also the presence of mankind and urbanisation that disrupts the wilderness. A toxic yellow rusting gas pipe, the corrugated iron fence of a favela, plumes of acrid smoke and even the “mushroom cloud” of an atomic bomb create a friction not just conceptually but also in their textural contrast. It is the interface between nature and the toxic footprint of mankind that creates the uneasy tension expressed in Ghenie’s work. The viewer is simultaneously seduced by his painterly technique and luscious use of colour and unsettled by the physiological darkness emanating from the pictures.

A group of nine related collages on paper will also be on view. The technique of collage is crucial to understand Ghenie’s practice. Sourced from the Internet and printed in his studio, images as diverse as animal fur, the scales of a putrefying fish, mushroom gills and the glossy surface of mucus membranes, each chosen for their specific textures, become the building blocks for Ghenie’s compositions. Each painting begins with a collage. Form, composition, texture and tone are rigorously investigated in these small, vivid artworks, which are the starting point for his larger canvases.

A group of large-scale grisaille charcoal drawings will be shown in the upstairs gallery. While he is an artist known for his painterly technique and his use of colour, with his new series of charcoals he reveals his skills as a draughtsman and introduces a new field for expression. It is the spontaneity of using charcoal on paper that he found liberating as the process of his paintings is highly pre-prepared and controlled.

Born in Baia Mare, Romania in 1977, Adrian Ghenie graduated from the University of Art and Design, Cluj, Romania. He lives and works in Berlin.

In 2015, he was selected to represent Romania at the 56th Venice Biennale. He has had major exhibitions worldwide; solo-exhibitions include the Villa de Medici, Rome; CAC Málaga, the Museum of Contemporary Art, Denver; Stedelijk Museum voor Actuele Kuns (S.M.A.K.), Ghent, and the National Museum of Contemporary Art Bucharest. He has also participated in in exhibitions at the Palazzo Grassi, François Pinault Foundation, Venice; Fondation Van Gogh, Arles; Tate Liverpool; Prague Biennial; San Francisco Museum of Modern Art; and Fondazione Palazzo Strozzi, Florence, among others.