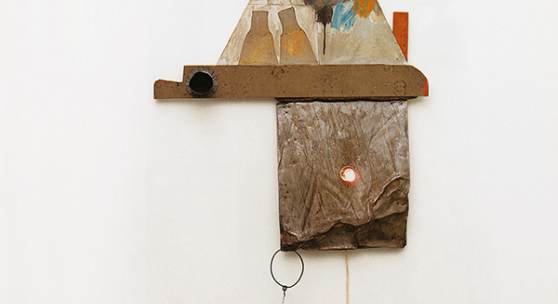 Galerie Thaddaeus Ropac is showing Slug (1961), a work from the Combine series (1954-64), and Rumor (1980), from the Spread series (1975-83), from the Robert Rauschenberg artist estate, represented by the gallery since 2015. Combine is a term Rauschenberg coined to describe a synthesis of sculpture and painting. These works, either free-standing or hung on the wall, characteristically contain ordinary objects from everyday life and their three-dimensionality expresses a sense of invasion into the viewer's space. Although Rauschenberg never considered himself a representative of Pop Art, the integration of everyday objects into the context of high culture was undoubtedly an epoch-making act.

Rauschenberg’s statement can also be applied to the Spread series, inspired by the wide expanses of the American landscape and the aesthetic of fabric coverings, these works are some of Rauschenberg's most monumental pictures.

Painted in the revolutionary year 1968, Georg Baselitz's Ein zerrissener Hund, aufwärts [A Fractured Dog, Upwards] exemplifies his Fracture Paintings series, which heralded the artist's distinctive inversion of the motif. Here, the dog motif is carved up like a jigsaw puzzle, the pieces partly staggered. These paintings attest Baselitz's shift towards the analytical aspect of painting: his attempt to create an order for his strongly emotional, expressive painting, with the aim of finding a regulating structure. The content became of secondary importance and thus, during this period, the purely formal aspect of his art took precedence over the iconography. Reminiscent of a wigwam constructed with five fragments of legs, Baselitz’s final cast of his bronze sculpture Zero Dom (2015) is presented here. John-Paul Stonard writes of the patina chosen by Baselitz for the matt black surfaces: "They betray the light-absorbing wood from which they were originally carved; memory falls into them, rather than drama out of them." Indeed, Baselitz's black bronze sculptures have, at times, the appearance of early archaeological discoveries.

Elizabeth Peyton also makes an appearance in the form of a small, sensitively executed portrait, typifying her unique combination of Old Master classicism and contemporary audacity. A mythical link between subject and artist is evident in this work.

As the history of the gallery is closely and personally associated with the legendary artist figure Joseph Beuys, it was a great honour to announce the gallery’s representation of his artistic estate this last April. Here we are showing a rare sculpture entrusted to us directly from his estate: Junges Pferdchen [Young Horse] (1955/86) is a wax figure of a horse in its opened plaster cast, which Beuys had placed in a showcase shortly before his death. Horses always occupied an important part of Beuysian iconography – one might recall his legendary performance Iphigenie/Titus Andronicus, where Beuys, wrapped in a fur coat, recited to a white horse passages from Goethe and Shakespeare. This 1969 performance in Frankfurt undisputedly belongs to the crowning art-historical moments of the young German Federal Republic.

In this year's Art Unlimited, Galerie Thaddaeus Ropac presents two projects. German Minimalist imbued artist Wolfgang Laib, on the one hand, presents an installation consisting of a wooden framework with seven simplified, inaccessible wax boat sculptures, entitled You will go somewhere else (1997/2005), inviting the viewer to meditate on the voyage to unknown earthly and spiritual destinations. On the other, Robert Longo, one of the foremost representatives of the Pictures Generation, shows his planet-like Death Star II (2017/18), a sphere consisting of 40,000 cartridge cases, hanging from the ceiling. It symbolises the increasing number of deaths by shooting in the USA over the past year. A Death Star, created in 1993, was considerably smaller. In this work, abstract, dry statistics assume a brutal, poignant form.