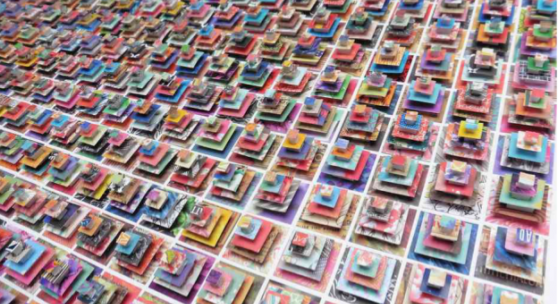 British 3D mixed-media artist Sue Haskel will be opening her Summer show 'The Third Dimension’ at The Plateaux Gallery at Thomas Goode on South Audley Street, Mayfair on Thursday, 12th July 2018.> With a background in marketing and interior design Sue Haskel is now a 3D mixed- media artist working primarily in paper and metal. Sue is inspired by the interplay between pattern and repetition, light and shadow, contrast and texture. She gathers ideas from her surroundings - from urban cityscapes to the natural world. Her themes are wide-ranging and include books, pyramid structures, leaves, fish and butterflies. The Plateaux Gallery, which has a worldwide reputation for exquisite contemporary works of art, with exceptional studio glass as well as functional and sculptural pieces, is based in the quintessentially British, architecturally fascinating and luxurious surroundings of Thomas Goode & Co.

Sue's work features in private collections worldwide, including the collection of the former chairman of the Tate Gallery, Lord Stevenson. He says about her work: “It’s rare to come across work which is at the same time unpretentious yet original. Sue uses paper so as to create beautiful and three dimensional work. Both of the pieces we have bought off her are hanging in our house and are giving great pleasure to us, our family and friends.”

Sue will be showing over twenty works in the show which essentially transform two dimensional materials such as paper into decorative three-dimensional forms. 'The Third Dimension' brings to The Plateaux Gallery not only the physical depth and volume in Sue’s work but some colour and optimism for our somewhat tired and cynical age. Sue also takes commissions and her original designs can be customised to suit a client’s brief by incorporating photos, logos and memorabilia.