Sotheby's Unveils Highlights from the Extraordinary Cellar of Robert Drouhin 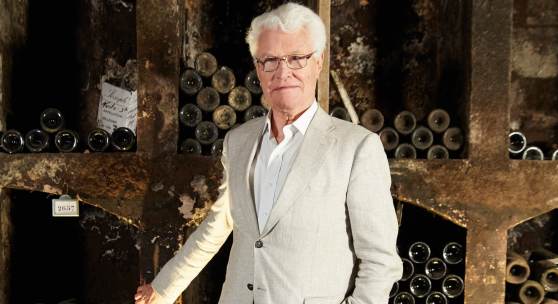 An Historic Offering of Domaine de la Romanée-Conti *The World’s Most Celebrated Producer* Featuring 100 Lots of Legendary Vintages Spanning from 1937 to 1964 Emerging from the Personal Collection of Mr. Robert Drouhin, Patriarch of Maison Joseph Drouhin & Longtime Distributor for DRC As Close to a Direct-from-the-Cellar Auction of DRC as Has Ever Been Held Auction 13 October at Sotheby’s New York

NEW YORK, 16 August 2018 – Sotheby’s is honored to present Rare Domaine de la Romanée-Conti from the Personal Cellar of Robert Drouhin in a dedicated auction of 100 lots on 13 October 2018 in New York. This historic offering of Domaine de la Romanée-Conti is emerging precisely after more than 50 years in the cellar of Mr. Robert Drouhin, patriarch of the family-run Maison Joseph Drouhin, who is internationally recognized as one of the wine industry’s most renowned figures.

The sale will offer DRC vintages spanning from 1937 through to 1964, acquired by Mr. Drouhin and his father, Maurice, directly from DRC, mostly during their time as the exclusive distributors in France and Belgium for the Domaine – a highly-covetable attribute that amplifies the collection’s pristine provenance. Superlative bottles of Maison Joseph Drouhin from Grands Crus will also be on offer from 1959, 1961 and 1962. The sale this October will present collectors with an unmatched opportunity to acquire legendary vintages of DRC, with only one owner since being removed from the cellar of the world’s most celebrated producer.

This unprecedented selection comes to market during a remarkable surge in demand for wines from Burgundy, which has steadily increased over the last five years. Domaine de la Romanée-Conti reigns supreme within the region – in fact, DRC has led Sotheby’s Wine’s Annual Market Report as Top Producer every year since we began our yearly rankings in 2013.

Robert Drouhin said: “It is a great pleasure to offer these 100 lots at auction with Sotheby’s Wine in October. These wines span four decades and are filled with remarkable and historic vintages from one of the world’s greatest Domaines. I have had access to these remarkable wines for many years, given that Maison Drouhin was the exclusive importer of Domaine de la Romanée-Conti in France and Belgium from the late 1920’s to the early 1960’s. The wines being offered have never left Beaune and have been in my private cellar, undisturbed, for more than 50 years. I have been fortunate to enjoy many of these exceptional bottles with friends and family over the years, and now it is time to share them with others. I hope that the buyers of these wines will know how scarce they are, how good the wines should be, and drink them with friends and family who can appreciate and enjoy them the right way.”

Serena Sutcliffe, MW, Honorary Chairman of Sotheby’s Wine, commented: “It is a great privilege for us to offer this historic collection of wines from the Drouhin family’s legendary cellar. This is an enchanted kingdom in the realm of wine and we are honoured to be asked to bring these precious bottles to auction. The vintages are among the greatest ever made in Burgundy, both extremely rare and gloriously individual. The perfect provenance stems from the long relationship between the Domaine de la Romanée Conti and the Drouhin family, two of the most respected names in Burgundy. The breathtaking line-up of DRC’s stunning vineyard sites brings back memories of vocabulary-defying wines that are imbued with the excitement and complexity of tasting at its pinnacle. One can hardly believe that these wines still exist – but, happily, they do! The icing on the proverbial cake is in the Drouhin Grands Crus from three show-stopping years, a complement to the DRC treasures. This is Burgundy’s Gift to the World.”

ABOUT MAISON JOSEPH DROUHIN
Maison Joseph Drouhin is internationally recognized as one of Burgundy’s foremost négociants and wine producers.

Established in 1880 by Joseph Drouhin, the domaine began acquiring vineyards in 1919 under the direction of his son, Maurice, after years of solely purchasing grapes to produce the quality wines for which it had become known in Beaune. Over several years, Maurice fostered close relationships with some of Burgundy’s most prominent families and business owners, including those of Domaine de la Romanée-Conti. From circa 1928 through to circa 1964, Maison Drouhin was the exclusive distributor of all DRC wines in France and Belgium – a highly-respected position that also afforded Maurice the opportunity to own many valuable pre-war wines, some of which will be offered in the October sale.

With so many great wines in the cellars of Maison Drouhin, the collection became a target for the Germans during World War II. Acutely aware of the value of these precious commodities, Maurice built a wall inside the cellars – a labyrinth of ancient paths and vaults located underneath the city of Beaune — to conceal an impeccable selection of wines, largely comprised of DRC. His son Robert, then just 8 years old, gathered cobwebs and dirt to spread about the fortress in an effort to hide the newly-built chamber. Maurice’s instinct to hide the wines would soon prove to be sound. In August 1941, he was arrested by the German police while on his way to the Hospices de Beaune, a well-known charity hospital where he served as vice president.