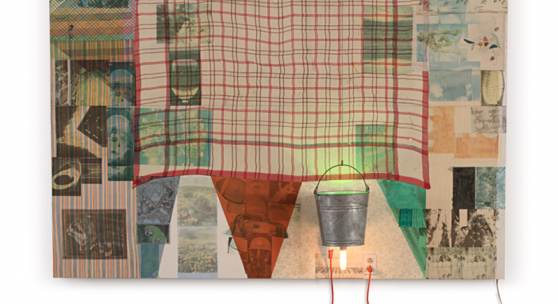 Galerie Thaddaeus Ropac looks forward to welcoming you to our booth at Frieze London where we’ll be showing work by twenty artists. Highlights include historic work by Robert Rauschenberg and Rosemarie Castoro, and new paintings by Daniel Richter, Alvaro Barrington, Adrian Ghenie and Oliver Beer. The gallery will also be offering significant works by Georg Baselitz, Emilio Vedova and Antony Gormley.

Rumor (Spread) (1980) is an exemplary work from Robert Rauschenberg’s iconic Spreads (1975-83), a series of large-scale multimedia wooden panels that feature solvent transfer images and patterned fabrics, often in combination with electrical components and three-dimensional objects. Incorporating a pail suspended from the canvas and a lightbulb plugged into a socket, the painting becomes a wall installation and demonstrates Rauschenberg’s constant will to challenge traditional art categories. The presentation of this work precedes the first exhibition ever dedicated to the Spreads in the U.K., opening at Thaddaeus Ropac London on 20 November 2018.

As part of Frieze's own focus on female artists this year, and following our recent exhibition Land of Lads, Land of Lashes at Thaddaeus Ropac London, we are proud to present Blue Red Gold Pink Green Yellow Y Bar (1965), a rare early work by pioneering American artist Rosemarie Castoro. The orchestration of the tessellated Y shapes across the canvas creates a dynamic sense of movement, introducing a visual playfulness that enlivens the geometric rigour of Minimalism. The first solo exhibition of Rosemarie Castoro’s work at the gallery will take place in Paris Marais in early 2019.

Antony Gormley’s FRONT (2016) is the result of an eleven-year-long investigation into the polyhedral shape as a geometric language for sculpture. The cast-iron sculpture translates the body into an accumulation of tightly nested cells derived from natural structures, and the life-size figure leans its upper body against the wall in a posture that the artist has described as a landslide in human form. The most significant solo exhibition of the artist’s work in over a decade will take place in the autumn of 2019 at the Royal Academy of Arts, London.

Euphoria in the Home (2018) by Oliver Beer is the first work to be shown from a new development of his Two-Dimensional Sculptures, this time in black gesso rather than white. To create these works, the artist slices through physical objects, such as musical instruments, and embeds them in gesso plaques so that only the cut surface of the object remains visible. Splintered apart into fragments, the violin loses all volume and functionality, becoming instead a two-dimensional image of itself. The next solo exhibition of the artist will take place in January 2019 at Thaddaeus Ropac Paris Marais.