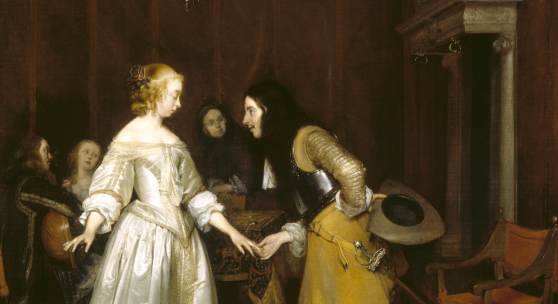 Starting 11th October 2018, the Mauritshuis is organising an exhibition on 17th-century Dutch paintings with an English origin. Twenty-two Dutch masters from twelve British country houses tell the story of the enormous popularity enjoyed by these Golden Age artists in the United Kingdom. In the 18th and 19th centuries in particular, the British nobility decorated the rooms of their monumental country houses with landscapes, portraits, still lifes and genre pieces by the most famous old masters, including Rembrandt van Rijn, Aelbert Cuyp, Pieter Saenredam and Jan Steen.

For this exhibition, the Mauritshuis selected some of the most beautiful Dutch paintings from houses managed by the National Trust, the charitable organisation that manages historic and natural monuments in England, Wales and Northern Ireland. This is a first and an honour for the Mauritshuis, because never was such a selection previously shown outside the United Kingdom.

Cuyp, Rembrandt, Steen
One of the highlights in the exhibition is an almost 2-metre-wide View of Dordrecht from the north by Aelbert Cuyp (c. 1655) with a beautiful evening sky (Ascott House, Buckinghamshire). From the 18th century, Cuyp's paintings were very popular with the English elite and his best works can therefore still be found in that country. In the Netherlands, on the other hand, they are still very rare to this day. This painting was so large that around 1774, it was divided in two and sold separately. In 1842, the parts we reunited once again.

Rembrandt van Rijn painted at least 40 self-portraits in his lifetime, and from Buckland Abbey in Devon comes this Self-portrait with feathered beret (1635). This work is also an example of a tronie, a painted study in which the person portrayed is dressed in an exotic costume.

Upton House, with its famous collection of paintings, is home to Interior of the Catharinakerk in Utrecht by Pieter Saenredam from c. 1660. This painting is characterised by the peaceful harmony of the enormous white interior to which the people are subordinate. Of course, Jan Steen is not missing. His oeuvre is vast, and taverns, cafés and brothels were favourites in his paintings. In the painting 'The Tired Traveler', also from Upton House, from c. 1660-61, a woman offers the man a glass of wine—or is there more going on?

National Trust
The British charity organisation National Trust - founded in 1895 - manages over two hundred country houses along with their contents, including the associated gardens, outbuildings and farmlands. More than 20 million people visit the National Trust Houses every year. A total of 22 paintings can be seen starting in October, from 12 different country houses, such as Ham House, Dyrham Park, Polesden Lacey and Ashdown House. The exhibition will travel from the Holburne Museum in Bath to the Mauritshuis, and will eventually arrive at Petworth House (UK), also owned by the National Trust.