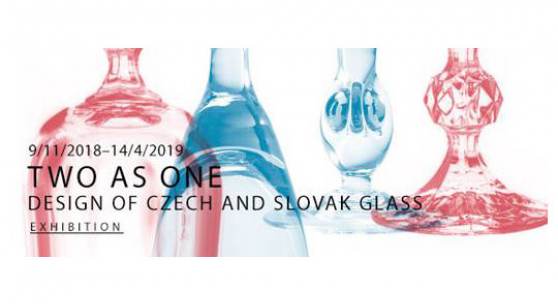 A part of the intergovernmental project Czech and Slovak Century project, the Museum of Glass and Jewellery in Jablonec nad Nisou has prepared a unique exhibition dedicated to the phenomenon of design drinking glass from between 1918 and 2018, a period in which both countries maintained their status of renowned global glassmakers. When preparing the TWO IN ONE exhibition, the state collection institution in Jablonec joined forces with the Museum of Decorative Arts in Prague and the Slovak Glass Museum in Lednické Rovne. This collaboration made it possible for authors Petr Nový, Milan Hlaveš and Patrik Illo to create a representative cross-section of Czech and Slovak drinking glass, including timeless best sellers, design experiments and exclusive collector’s pieces. The artefacts on display include work done by prominent personalities from the First Republic, including Ladislav Sutnar and Ludvika Smrčková, and from the socialist era, including Miloš Matoušek, Jozef Staník, Milan Metelák and Pavel Hlava. The period from 1989 to the present, meanwhile, is represented by designs from the studios of Olgoj Chorchoj, Jiří Pelcl, Rony Plesl and Patrik Illo.

“The area of drinking glass is one in which both countries have complemented and influenced each other to the greatest extent. The name therefore reflects the close proximity of the Czech Republic and Slovak Republic in the heart of Europe between 1918 and 1992, whilst at the same time recognising the reciprocity and differences involved, which have remained irrespective of social and political relationships," says Petr Nový in explaining why the authors of the exhibition chose this area as the theme of the exhibition and the name Two in One.

A publication of the same name of more than 300 pages in Czech, Slovak and English, with a wide array of photographs, has also been created to accompany the exhibition. It is, in fact, the very first compilation of Czech and Slovak glass of its kind. “The history and present are not simply an interesting cultural and historical topic – for us they were also an explorational challenge. These are stories that although interwoven with each other, never entirely come together,” adds editor Petr Nový. A special interactive programme has been prepared for visitors to familiarise them in an entertaining way with the concepts that drinking glass calls its own – purpose, shape, colour, décor and emotion.