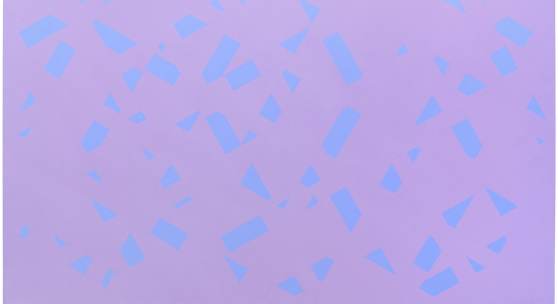 RT COLOGNE HALL 11.2 | STAND A3 11 – 14 APRIL 2019
In anticipation of the upcoming 53rd ART COLOGNE, we are pleased to share some of the highlights we will be presenting at our stand this year (as usual, Stand A3 in Hall 11.2). The selection includes works by Georg Baselitz, Oliver Beer, Rosemarie Castoro, Tony Cragg, Antony Gormley, Alex Katz, Nick Oberthaler, Sigmar Polke, Arnulf Rainer, Robert Rauschenberg, Daniel Richter, Sturtevant, Emilio Vedova and Erwin Wurm.

We are particularly pleased to present a rare, early work by the American artist Rosemarie Castoro (1939-2015), one of the most inventive and versatile artists in the fields of New York Minimalism and Conceptual Art. The large-scale canvas Dioxomine Cereulean (1965) belongs to Castoro's Interference series, characterised by the recurring element of Y. The work’s organising principle is based on intersecting pencil lines that run parallel to the Y axis of the monochrome lilac canvas.

Robert Rauschenberg (1925-2008) painted his Spreads series between the years of 1975 and 1983. The series occupies an important position in the artist's œuvre, containing many of his best-known motifs and materials and revealing changes in his life and working methods. In these monumental works, Rauschenberg consistently returns to a figurative pictorial vocabulary, while retaining many minimalist elements from his Jammers series (1975-76). This is particularly apparent in the approximately two by three-metre work, Rose Pole (Spread) (1978).

The work Laura 11 by American artist Alex Katz (1927), a pioneer of pop art, is part of his series Dancers (2017), in which the New York dancer Laura is portrayed in various stances on large-scale canvases. Katz began collaborating with the legendary Paul Taylor Dance Company in the 1960s, after which dance became a recurrent theme in the artist’s work. In contrast to his earlier depictions of dancers, in this most recent series Katz concentrates only on the face and expressions of his dancing protagonist. The subject’s pose is "frozen in a moment of stillness that, beyond the canvas, is part of an ongoing motion". (Mark Rappolt, 2011)

The large-scale work on paper Untitled (2000) is a particularly impressive example of Sigmar Polke's (1941-2010) orientation towards abstraction from the 1980s onwards. During this period, Polke’s interest in alchemy increased, as did the influence of chemical experiments on his working method. The seemingly random blotch of purple dripped across the black-primed paper turns out, on closer inspection, to be a complex abstract form that exhibits the essential aesthetic characteristics of Polke's art.

The medium of sculpture is represented with a historical work by Tony Cragg from his Envelopes series (prominently displayed for many years in public spaces in Vienna), a new life-size cast-iron sculpture by Antony Gormley, from his series BRANCHER (2016-2018), and surrealist ceramic sculptures by Erwin Wurm, premièred only a few weeks ago in our London gallery, and which once again put the tradition of representing the human body in sculpture to the test.