Sotheby's Brings 'Treasures from Chatsworth' to New York This Summer 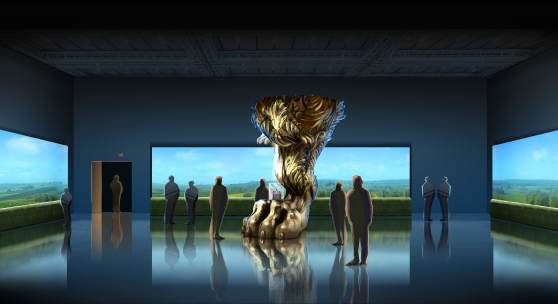 April 2019 – Sotheby’s is honored to announce Treasures from Chatsworth – a rare, public exhibition in the United States of works from the fabled Devonshire Collection, held at historic Chatsworth House in the United Kingdom.

Coinciding with Sotheby’s 275th anniversary in 2019, as well as the opening of our expanded and reimagined New York galleries, the Treasures from Chatsworth exhibition will be designed by the award-winning creative director and designer David Korins, whose work includes the set designs for the Broadway musical phenomena Hamilton and Dear Evan Hansen, as well as past Sotheby’s exhibitions. The extended exhibition will offer viewers an immersive experience, featuring extraordinary objects illustrative of the Devonshire Collection while simultaneously bringing to life the experience of Chatsworth House and its spectacular grounds.

Forty-five masterworks have been selected for the Treasures from Chatsworth exhibition to represent the remarkable breadth of the Devonshire Collection – fine art from Rembrandt van Rijn to Lucian Freud, furniture and decorative objects from the 16th century to 21st-century design, and exceptional jewels, costumes, and archive materials commemorating historic occasions will all be on view to the public. A selection of individual highlights is below, with additional works to be announced throughout the spring.

Free of charge and open to the public, Treasures from Chatsworth will be on view from 28 June through 18 September 2019 in Sotheby’s New York galleries, located at 1334 York Avenue.

The Duke of Devonshire said: “It is wonderful that the first pieces to be displayed in this new gallery will be from the Devonshire Collection, and that the plans that Sotheby’s and David Korins have for the space will present these works in an entirely original and inspiring way. Since I became Deputy Chairman in 1996, the relationship between Chatsworth and Sotheby’s has developed exponentially, and continues to present new and exciting opportunities for us both. This exhibition gives us the chance to share Chatsworth with a new audience, tell people about the invaluable work of the Chatsworth House Trust charity, and to demonstrate the way in which the Devonshire Collection continues to evolve with each generation of our family. I am very much looking forward to visiting.”

Tad Smith, Sotheby’s CEO, commented: “Sotheby’s has been fortunate to share a special relationship with the Duke and Duchess of Devonshire and Chatsworth for nearly 25 years. From bringing monumental sculpture to life on the estate’s stunning grounds with Beyond Limits, to the spectacular House Style: Five Centuries of Fashion exhibition, we have been inspired by their commitment to share their home and history with the public. It is truly an honor for Sotheby’s to host treasures from this legendary collection and to share them and the mission of the Chatsworth House Trust with the American public.”

David Korins, award-winning creative director and designer who will design the Treasures from Chatsworth exhibition, stated: “I am thrilled once again to collaborate with Sotheby’s to make a new in-depth and immersive experience. It’s an added pleasure to inaugurate and celebrate Sotheby's newly-renovated home on the Upper East Side of Manhattan showing the work from Chatsworth House. It is an honor to create this one-of-a-kind walkthrough exhibition and deliver a taste of the fascinating treasures from the Devonshire Collection to New York audiences. In this experience, I’ve curated this sweeping & diverse collection of art into installations of hyper-articulated, blown-up details of the Duke and Duchess’s home. I hope that our guests will be entertained, delighted, and treated to a deeper look into the textures, details, and unique stories of the Cavendish family.”

This masterly painting of an old man by Rembrandt van Rijn is signed and dated 1651 – a period during which the artist painted rarely and received few portrait commissions.

It is not certain whether this work is a commissioned portrait. Alternatively, it may show an old male model, dressed in a rich exotic costume, sitting for a ‘tronie’ – a popular Dutch genre painting of the time. Such works gave the artist the opportunity to show off their technique: here, with directional lighting, Rembrandt shows his mastery through lighting in depicting character and old age, with his broad brushstrokes bringing to life the texture and weight of the man’s rich costume.