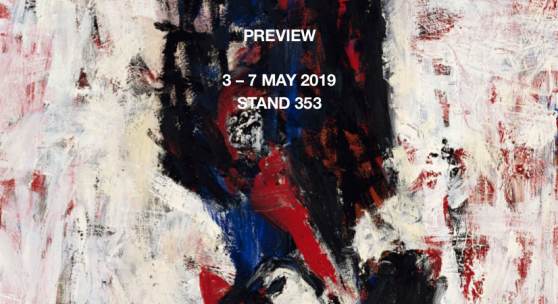 Galerie Thaddaeus Ropac is delighted to announce its first participation in TEFAF New York with the presentation of one of the finest portraits by Georg Baselitz of his wife Elke that was painted during a period of intensive formal innovation. The work will be shown within a curated booth highlighting the unique relationship between Baselitz and Emilio Vedova through seminal works from both artists. The pair met in Berlin in the early 1960s and shared not only a long-standing and close friendship, but also an appreciation of the other’s artistic approach.

Georg Baselitz’s Blauer Elkekopf (1979-1980) - an early portrait of the artist's wife, Elke - marks a pivotal moment in Baselitz's six-decade career, during which he moved towards a freer, more expressionistic application of paint and use of colour, resulting in works of astonishing vigour and formal power. Baselitz's portraits of Elke constitute the largest single group of his portraits and the radical evolution of his style can be traced through these portraits alone. Gallerie dell’Accademia will open a major solo show of Baselitz's work during this year’s Venice Biennale, marking the museum's first exhibition by a living artist (8 May - 8 September).

Emilio Vedova pushed painting into new territories with his visceral and gestural works that engage the viewer and redefine the space they inhabit, calling for active participation from the position of spectator. The vivid red, monumental size and expressive brushwork of Untitled (1983) are characteristic of the works he produced in the 1980s, a period that has been widely recognised as the acme of his career. Marking his centenary year, an exhibition of the artist’s work, curated by Baselitz, is currently on view at Venice’s Fondazione Emilio e Annabianca Vedova.