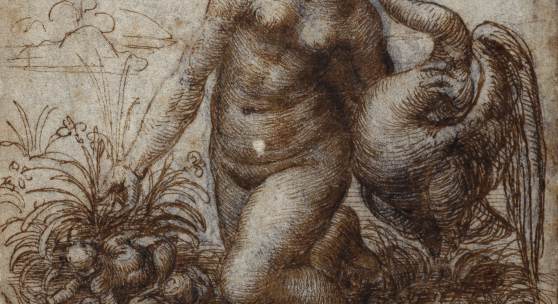 NEW YORK, 2 May 2019 – Sotheby’s is thrilled to announce that Leonardo da Vinci’s Leda and the Swan – one of the greatest drawings of the artist’s legendary career, and one of the jewels of the famed Devonshire Collection – will join our public exhibition Treasures from Chatsworth this summer in New York.

Created by Leonardo da Vinci (15 April 1452 – 2 May 1519) in Florence or Milan circa 1506 – while he was working on the Mona Lisa – Leda and the Swan is a mythological preparatory drawing in pen, ink and wash. The work represents one of Da Vinci’s earliest designs for a composition of Leda, wife of the King of Sparta, and Jupiter, who has taken the form of a swan to seduce her. Hatching from the eggs at Leda's feet are their offspring: the twins, Helen (later Helen of Troy) and Clytemnestra, and Castor and Pollux.

The skill and originality that separates Da Vinci from his contemporaries is evident throughout this drawing. Da Vinci directs our eye through the narrative: Jupiter as the swan leans towards Leda, whose hand gestures to their children, hatching from eggs in the plants at her feet. The curved, hatched lines used to depict Leda's body create a sense of three-dimensionality, while the spiraling pen strokes of the emerging newborns imbue a dynamic sense of energy and movement.

Leda and the Swan likely was acquired for the Devonshire Collection by either the 2nd or 3rd Duke of Devonshire in the first half of the 18th century. Today, Chatsworth boasts one of the finest and most extensive private collections of Old Master drawings in the world.

Leda and the Swan is even more remarkable for its history, having almost been lost in the chaos of World War II. The work was requested for loan to an exhibition of Da Vinci’s work in Milan in 1939. Knowing that war was imminent, the 10th Duke of Devonshire was reluctant to do so, but was convinced knowing that King George VI was sending requested works from the royal collection. The work was not able to leave Italy after the exhibition, and survived World War II in storage at the Castel Sant'Angelo, Rome. When returned to Chatsworth following the war, it bore the white marking now seen in the center of the drawing.

Sadly, the painting for which this drawing served as a study has itself not survived. Today, it is best shown in copies by artists who worked with the artist.

Sotheby’s Treasures from Chatsworth exhibition will mark the first public viewing of Leda and the Swan in the United States since The Metropolitan Museum of Art, New York’s ground-breaking 2003 exhibition Leonardo da Vinci, Master Draftsman.

Coinciding with Sotheby’s 275th anniversary in 2019, as well as the opening of our expanded and reimagined New York galleries, the Treasures from Chatsworth exhibition will be designed by the award-winning creative director and designer David Korins, whose work includes the set designs for the Broadway musical phenomena Hamilton and Dear Evan Hansen, as well as past Sotheby’s exhibitions. The extended exhibition will offer viewers an immersive experience, featuring extraordinary objects illustrative of the Devonshire Collection while simultaneously bringing to life the experience of Chatsworth House and its spectacular grounds.

More than 40 masterworks have been selected for the Treasures from Chatsworth exhibition to represent the remarkable breadth of the Devonshire Collection – fine art from Rembrandt van Rijn to Lucian Freud, furniture and decorative objects from the 16th century to 21st-century design, and exceptional jewels, costumes, and archive materials commemorating historic occasions will all be on view to the public. A selection of individual highlights is below, with additional works to be announced throughout the spring.

Free of charge and open to the public, Treasures from Chatsworth will be on view from 28 June through 18 September 2019 in Sotheby’s New York galleries, located at 1334 York Avenue.

A detailed release is attached, as is an image of the work that can be credited “© Devonshire Collection. Reproduced by permission of Chatsworth Settlement Trustees”.