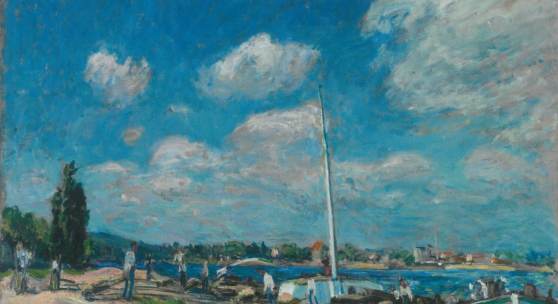 JUNE 28, 2019, PRAGUE – Tomorrow the National Gallery Prague will open an exhibition of French Impressionism at Kinsky Palace, whose extent is quite unique in Czech history. The collection, that is now in the holdings of the Danish state-owned museum at Ordrupgaard and in terms of its quality is on a par with the famous collections in Paris, was created in the 1920s by the businessman and art patron Wilhelm Hansen.

“I dare say that the opportunity to see such a comprehensive collection of French Impressionism in the Czech Republic may never occur on such a scope again. The fact is that museums are not always willing to lend works by these distinguished artists; arranging a loan of even one canvas can take many months and even years, and some chefs-d’oeuvre never leave their place at all,” notes the exhibition’s curator Petr Šámal.

The exhibition, shown from June 29 at Kinsky Palace, presents selected paintings from Hansen’s collection whose core consists of works of French Impressionists. The event showcases masterpieces by Claude Monet, Edgar Degas, Auguste Renoir, Camille Pissarro, Berthe Morisot, and others. The display is also an overview of French painting of the 19th and early 20th centuries, with a focus on the precursors and successors of French Impressionist art. Romantic painting is represented by Eugène Delacroix, and the realistic manner of visual expression by Gustave Courbet, Camille Corot and members of the Barbizon School; canvases by Édouard Manet are also among the exhibition’s highlights. Salient in the collection that contains some sixty paintings are also the Post-Impressionist works of Paul Cézanne and Paul Gauguin.

“Today, French Impressionists are the pride and joy of every museum. However, purchasing their artworks required considerable courage and collecting intuition in their day. Wilhelm Hansen was a champion of French art collecting in the Scandinavian countries. During and shortly after World War I, Wilhelm created a collection of paintings that is unparalleled in Scandinavia,“ observes Petr Šámal on the history of the collection.

Wilhelm Hansen, a Danish insurance magnate, soon opened his collection to the public and later bequeathed it to the Danish State. The National Gallery Prague is now presenting it to visitors in Central Europe for the very first time. Temporarily closed due to reconstruction work, the Ordrupgaard Museum has decided to lend the collection to the most prominent art institutions abroad – prior to Prague, it was shown in France, Canada and Switzerland. The exhibition “French Impressionism: Masterpieces from the Ordrupgaard Collection” will be on view at Kinsky Palace of the National Gallery Prague from June 29 to October 13, 2019.