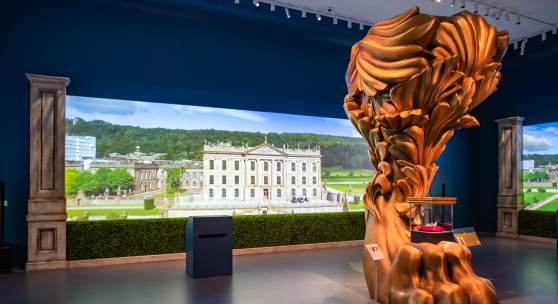 A Fully-Immersive Exhibition Showcasing Extraordinary Art & Objects Spanning 500+ Years of Collecting By the Cavendish Family and the Dukes of Devonshire
Masterworks from Leonardo da Vinci to Lucian Freud, Exceptional Jewels Made for Royal Events,
And Many More Treasures Bring England’s Chatsworth House To Life in the United States

NEW YORK, 28 June 2019 – Sotheby’s New York opens its doors today to Treasures from Chatsworth – a rare, public exhibition in the United States of works from the fabled Devonshire Collection, held at historic Chatsworth House in the United Kingdom.

Coinciding with Sotheby’s 275th anniversary in 2019, as well as the opening of our expanded and reimagined New York galleries, the Treasures from Chatsworth exhibition has been designed by the award-winning creative director and designer David Korins, whose work includes the set designs for the Broadway musical phenomena Hamilton, Dear Evan Hansen, and the recent Tony Award-nominated Beetlejuice: The Musical, as well as past Sotheby’s exhibitions.

The extended exhibition will offer viewers an immersive experience, featuring extraordinary objects illustrative of the Devonshire Collection while simultaneously bringing to life the experience of Chatsworth House and its spectacular grounds.

More than 40 masterworks have been selected for the Treasures from Chatsworth exhibition to represent the remarkable breadth of the Devonshire Collection – fine art from Leonardo da Vinci and Rembrandt van Rijn to Lucian Freud, furniture and decorative objects from the 16th century to 21st-century design, and historic jewels, costumes, and archive materials commemorating historic occasions will all be on view to the public. A selection of individual highlights is below.

The exhibition will also incorporate a special augmented reality (AR) experience for guests to explore the Cavendish family tree through a series of interactive portraits for a closer look at the lives of past Dukes and Duchesses. In addition, QR Codes throughout the exhibition will allow visitors to access additional audio commentary and to experience panoramic views from the Chatsworth House and grounds.

Free of charge and open to the public, Treasures from Chatsworth will be on view from 28 June through 18 September 2019 in Sotheby’s New York galleries, located at 1334 York Avenue. Docent tours will be led daily Mondays through Saturdays, at 11:00am and 3:00pm.

The Duke of Devonshire said: “We are so excited to have works from The Devonshire Collections among the first pieces to be displayed in the new gallery spaces at Sotheby’s in New York. Together, Sotheby’s and David Korins have created a space that presents these works in an entirely original and inspiring way, evoking the experience of visiting Chatsworth while also sparking new dialogues and views. Since I became Deputy Chairman in 1996, the relationship between Chatsworth and Sotheby’s has developed exponentially, and continues to present new and exciting opportunities for us both. This exhibition gives us the chance to share Chatsworth with a new audience, tell people about the invaluable work of the Chatsworth House Trust charity, and to demonstrate the way in which The Devonshire Collections continue to evolve with each generation of our family. We are so pleased to welcome you into our Collection.”

Tad Smith, Sotheby’s CEO, commented: “Sotheby’s has been fortunate to share a special relationship with the Duke and Duchess of Devonshire and Chatsworth for nearly 25 years. From bringing monumental sculpture to life on the estate’s stunning grounds with Beyond Limits, to the spectacular House Style: Five Centuries of Fashion exhibition, we have been inspired by their commitment to share their home and history with the public. It is truly an honor for Sotheby’s to host treasures from this legendary collection and to share them and the mission of the Chatsworth House Trust with the American public.”

David Korins, award-winning creative director and designer of Treasures from Chatsworth, stated: “Bringing the Chatsworth House and Devonshire Collection to life with this exhibition has been such an enriching experience that I hope our guests will find as intriguing and exciting as I did throughout the creative process. This experience offers a rare peek at not only one of the world’s most important art collections, but into the storied history of the Cavendish family. I can think of no better way to celebrate Sotheby’s 275th anniversary than with this historic project."