Sotheby's S|2 Gallery Presents Where Were You at Nigh 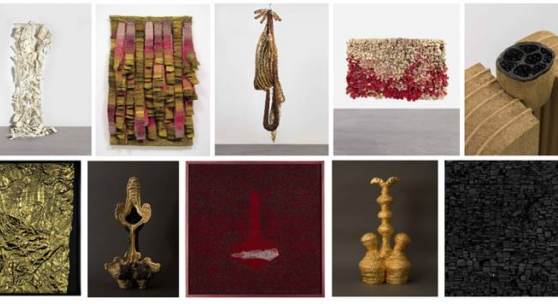 08 July 2019, London: This Summer, S|2 presents Where Were You at Night, a group exhibition of tactile and intricate works which shift between ideas of the handmade, of touch, of holes and of weaving, to offer a compelling dialogue on materiality and the dimensions created by the negative spaces between.

The second in a trilogy of group exhibitions at the gallery where a work of literature forms the conceptual framework, Where Were You at Night takes its title from a collection of short stories written by Brazilian author Clarice Lispector, which she began writing in 1951, and which will be reprinted in the show’s accompanying catalogue. Possessing not one narrative but fourteen, a new conclusion must be drawn from each thread. In the same way, each artwork in the show offers a new interpretation of texture and medium, and an exploration of the dark dimensions which exist between every perceptible thread of material.

Occupying both floors of the gallery, the show brings together an eclectic host of eleven artists for the very first time. The artists and the multitude of malleable mediums in which they work – from clay to wood, ceramic, porcelain, rope and earthenware – appear in an egalitarian dialogue with one another; from Leonardo Drew, who recently unveiled his first outdoor public sculpture in Madison Square Park, to Colombian visual artist Olga de Amaral, whose large-scale abstract works have hung in the Museum of Modern Art since the sixties.

The show also draws on pioneering British artists including Gordon Baldwin, recognised as one of the world’s most distinguished ceramicists who has helped to redefine the expressive language of clay, and Shelagh Wakely, a prominent figure in the British Sculpture Movement of the 1980s whose contemporaries include Richard Deacon, Barry Flanagan and Anish Kapoor. The range of media used by Wakely – encompassing clay, wire, cut silk, gilded fruit, ink on paper and canvas – attests her restless desire to unnerve and peel back what lies beneath the surfaces of materials and what might exist between them.

Capturing the zeitgeist of the medium’s resurgence in the sphere of contemporary art, Where Were You at Night reflects the shift in perception of earthy and unconventional mediums as ‘fine art’ as opposed to craft. This is epitomised by Françoise Grossen’s suspended ropes, which explore the idea that the knotted medium could one day exist unbound to the existing hierarchies of sculptural practice. Furthermore, British-Singaporean artist Kim Lim, who was the subject of a solo exhibition at S|2 in 2018, uses wood and steel to create ageless forms from mythological creatures to cultural figures, and timeless objects including abaci and chess pieces.

The show comes at a time when artists, curators and collectors are connecting with clay, textiles, woodwork and ceramic afresh, and draws comparison to recent exhibitions including the Anni Albers’ retrospective at Tate Modern, Do Ho Suh’s recent major survey at the Brooklyn Museum, Sheila Hicks at the Nasher Sculpture Centre in Dallas, and Jennifer Lee’s forthcoming UK debut solo exhibition at Kettle’s Yard in Cambridge.