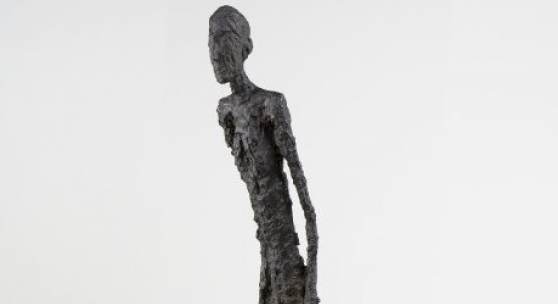 For the very first time in the Czech Republic, the National Gallery Prague presents the work of one of the most important, influential and beloved artists of the 20th century, the sculptor and painter Alberto Giacometti (1901–1966).

This extensive retrospective exhibition maps Giacometti’s artistic development across five decades. It follows its course from the artist’s early years in the Swiss town of Stampa, through his avantgarde experiments in inter-war Paris and up to its culmination in the unique manner of figural representation for which the artist is known best. His impressive elongated figures, which Giacometti created after World War II and which carry a sense of existential urgency, reflect his sense for the fragility and vulnerability of the human being.

Thanks to a joint collaboration with the Fondation Giacometti in Paris, who administers the estate of Annette and Alberto Giacometti, we are able to present over one hundred sculptures, including a series of valuable plaster statuettes, to the Czech audience. The exhibition will also feature several of Giacometti’s key paintings and drawings that testify to the breadth of his technical ability and thematic ambit,” says Julia Bailey, the exhibition’s curator from the NGP’s Collection of Modern and Contemporary Art. The exhibition at the Trade Fair Palace will feature such notable examples of Giacometti’s works as Walking Man, Standing Woman or his Women of Venice, which intrigued audiences at the famous Italian Biennale in 1956, as well as several other of his iconic works such as Spoon Woman, Woman with Chariot, Nose and valuable miniature plaster sculptures, intimate portraits of the artist’s family and friends who have been Giacometti’s favourite models all life long.

Giacometti, whom Jean-Paul Sartre described as one of the most important existential artists, refused strictly realistic representation because he perceived an insurmountable abyss between reality and art. “The originality of Giacometti’s work lies in the fact that it is situated on the very edge of this chasm. He internalised his earlier struggle with representation to such an extent that it became a motive force for his art,” explains Catherine Grenier, director of the Fondation Giacometti, President of the Giacometti Institute, and co-curator of the show.

The exhibition Alberto Giacometti, prepared by the National Gallery in collaboration with the Fondation Giacometti in Paris, will open on 18 July 2019 on the first floor of the Trade Fair Palace and run until 1 December 2019. It will be complemented by a rich accompanying programme as well as a companion volume.