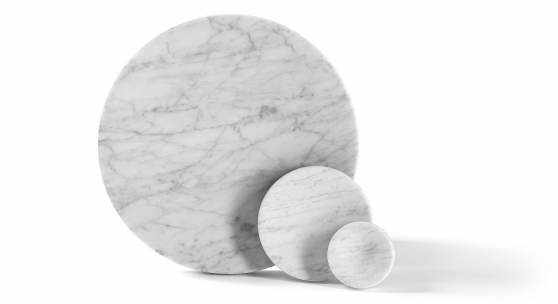 On Tuesday 17 September Pawson will join CEO Gabriele Salvatori and co-founder and creative director of Port magazine Kuchar Swara in conversation at Salvatori’s Wigmore Street showroom to discuss the role of natural stone in contemporary design. Following the discussion, the three will host a cocktail reception to celebrate Pawson and Salvatori’s new collection and toast to the opening of London Design Festival 2019.

Originally launched in Milan at this year’s Salone del Mobile, the Ellipse collection is a family of vessels and utensils for the home designed by Pawson, a long-time Salvatori collaborator. Sharing a geometry and materiality – each piece is shaped from a continuous piece of Bianco Carrara marble – the collection is typical of Pawson’s expressive, minimal style: the simple forms of the vessels evoking a sense of calm and a spirituality. ‘I want to make things that generate an intensity of engagement, with everything the eye sees and the hand touches,’ explains Pawson of the guiding principles that defined this collaboration.

“John, a long-time collaborator of Salvatori, is revered for his simple, expressive architecture and the new Ellipse home collection perfectly demonstrates his famously rigorous approach. Most people don’t get to see the amount of care John puts into creating even the smallest object. When designing the collection, he spent countless hours perfecting each curve, manipulating the Bianco Carrara marble by a fraction of a millimetre at a time to find the exact, precise shape. No matter how long it took, we would not go into production until he was 100% satisfied with the design. Collaborating on this collection was a reconfirmation of how rewarding it is to work with John, a true master of his craft,” describes Salvatori CEO Gabriele Salvatori of the collaboration with Pawson.

Following the success of her ‘Hidden Rooms’ installation at Salvatori’s Milan flagship during Salone del Mobile, boundary-pushing architect and interior designer Elisa Ossino will reimagine the Marylebone showroom for the occasion. Following the theme ‘Finding Forms’, the ground floor will be dedicated to Salvatori’s growing Home Collection of accessories and furniture, while the underground level will see a significant renovation aligning the space with the Milan flagship. The artfully redesigned interiors will be revealed to the public upon the opening of the London Design Festival.

Salvatori is an award-winning third-generation Italian design company specialising in natural stone. Founded in 1946, the company is renowned for its innovative and elegant products created in our Tuscan headquarters just a few kilometres south of the famed Carrara marble quarries. From textures for walls and floors, to bathroom items and products for the home such as tables, lighting, mirrors and decorative pieces, the Salvatori brand is recognised as the global benchmark in the “design meets natural stone” field.

Drawing on the very best of Made in Italy values and know-how, Salvatori fuses old-fashioned craftsmanship with contemporary design. Whilst many of its products are the result of partnerships with internationally noted designers, what lies at the heart of all it produces is a deep-rooted passion for the inherent beauty of natural stone, and its defining characteristic: that no two pieces can ever be identical, meaning that every single product has its own unique history.

In 2010 Salvatori developed the award-winning Lithoverde®, the world’s first recycled stone, which is 99% composed of offcuts and has been globally recognised for its contribution to architectural sustainability.

Salvatori products are distributed in over 100 stores worldwide whilst the company has flagship mono-brand showrooms in London and Milan.

John Pawson CBE has spent nearly four decades making rigorously simple architecture that speaks of the fundamentals but is also modest in character.  A sense of engaging with the essence of a philosophy of space through everything the eye sees or the hand touches is a defining aspect of Pawson’s work. His body of work spans a broad range of scales and typologies, from private houses, galleries, hotels, ballet sets and yachts, to the new Cistercian monastery of Novy Dvur in the Czech Republic, the Sackler Crossing at the Royal Botanic Gardens, Kew and interior renovation of the St Moritz Church in Augsburg. In 2016 he completed his first major public project — the interior remodelling of the former Commonwealth Institute building in London, an iconic example of post-war British Modernism, as the new permanent home of the Design Museum. Pawson was among the first to appreciate the potential of Lithoverde®, Salvatori’s groundbreaking stone made of recycled marble, using it for the acclaimed House of Stone that headlined Milan Design Week 2010.  Eight years later he returned to Tuscany to design the ‘Span’ furniture collection and most recently the ‘Ellipse’ homeware collection.