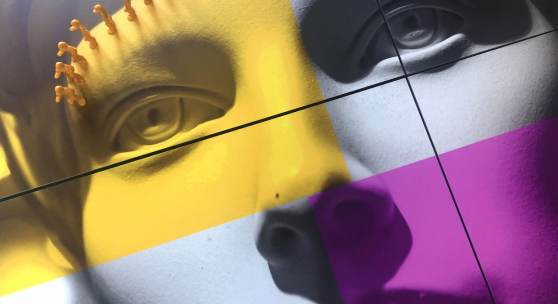 GERHARDT BRAUN GALLERY ART PALACE - CALLE SANT FELIU 10
Francesca Martí focuses on the human dynamic. Through her art, she analyses human behaviour, whenever people are gathered together in crowds at political demonstrations, in religious rites, at border controls, commuting to work or even as a group of fans at a sporting event. Martí looks at the role of leaders, followers and congregations. Her figures wander through the cityscapes she has photographed in Madrid, New York, Shanghai, Stockholm and other urban hubs.

She has called these sculptures her Believers. They are explorers migrating to new, brightly coloured territories. Sometimes these figures all follow the same path, as in Martí's Energy Ray installation, a procession of Believers advancing with the determination of a lightning bolt. Meanwhile, a series of works in perspex boxes by Martí features the enlarged heads of anonymous mannequins and blocks of bold, neon colours. Surreal chains of figures move in single file across expressionless faces. "The life-like figures of the mannequins are without a soul, but they are given new spirit by the energetic Believers walking across the topography of their faces," explains Martí. "They are like explorers discovering new lands.”