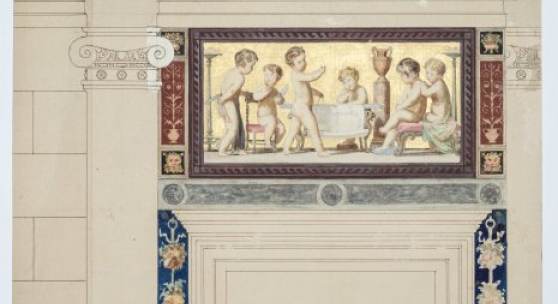 This exhibition, opening together with the new display of nineteenth century art at the Trade Fair Palace, presents the theme of the architectural décor of residential buildings. Decorative architecture was particularly abundant in Prague, which is the main focus of the exhibition. It culminated during the building boom at the turn of the twentieth century, and its manifestations remain an indispensable part of the visual image of the Czech metropolis. The exhibition takes a look at the painted, sculpted, and stucco ornamentation of the interior and exterior of rental buildings, as well as of the palaces and villas commissioned by various entrepreneurs. This theme has only rarely been the theme of any exhibitions specifically because the artworks involved are so firmly linked to architecture. However, many designs for architectural décor have been preserved in the form of drawings and watercolours, as well as cardboard templates in 1:1 scale, and even a few plaster models and sculptures. The exhibition also includes the little-known illustrated pricelists published by the companies producing architectural décor, contemporary photographs, and samples of completed works – paintings and sculptures – made specifically for architecture. The displayed works include those of famous artists (such as Mikoláš Aleš, Josef Václav Myslbek, Viktor Barvitius, and Josef Mánes), as well as those made by lesser known artists and companies, who also played a huge role in the present-day appearance of Prague and its artistic diversity. An extensive, richly illustrated monograph has been published to accompany the exhibition.