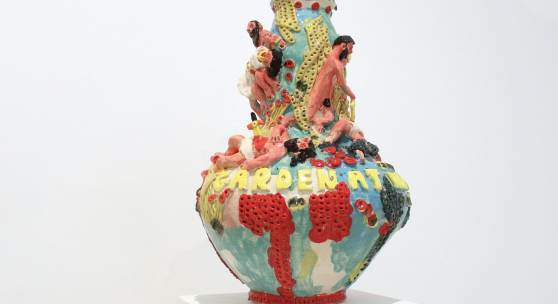 Identities starts from a differential story where each work is an unfolded identity. This exhibition speaks of their beauty, of their diverse identities and of their perfect coexistence. Abstraction dialogues with figuration, just as sculpture also has a presence in this sample of differentiated identities.

Light plays a different role in each of the artists. In Patrik, light is a fundamental factor in segmenting information into layers of abstraction. Grijalvo undergoes an exercise of strong uprooting from natural reality while photography becomes sculpture. In Javier Ruiz, by contrast, light bathed in dreamlike hues permeates the scenes. Javier makes fun of the everyday as a praise of the sublime and captures the exact moment of dialogue between both worlds.

This line could be related to Cesc Abad, with his naïve and ironic style. Abad shows a hybrid reality between the technological revolution and the animal instinct. With an acidic and refined look, the metaphor is the order of the day as an expressive weapon.

On the other hand, Dirk Salz‘s images are placed on smooth surfaces that serve as metaphorical mirrors for the viewer; mirrors that reflect the viewer as a way of understanding the frame in which the work is placed, its viewer and the relationship that is created between both. The spectator is reflected in the work, while the work reverberates in the one who contemplates it.

In relation to Dirk, Eric Cruikshank studies color as an homage to his native Scotland. The use of color in an emotional way translates into a study of the everyday, while the viewer is encouraged to address notions of his surroundings, where the familiar opens up and becomes full of possibilities. His artistic process opens a dialogue between the past and the present, the historical and the contemporary.

The drive between past and present traces is addressed by Francisco Suárez in his painting. The geometry in his work translates into a certain mysterious drive of what emerges spontaneously in the act of painting. His fields of lines are born from drops of paint that, placed freehand, flow over the surface and give the whole a special vibration.

On the sculptural plane, Mario Dilitz contrasts the aesthetic beauty of his sculptures and the content of the themes, in a profound confrontation with the whims of human existence. His sculptures, most of them life-size, are placed on the same physical plane of the spectator, in an eternal wait to begin a dialogue.

In this same sense, Lluc Baños unfolds a new personal imaginary. His work is built on the decoding of signs, formats and materials, as if it were a language, with which he offers a scopic vision of the act of seeing, representing and knowing.

In general, it could be said that the works are the result of an expressive freedom on the part of his artist. In their representative outburst, they place new characters within their inner world displayed as a way of distancing themselves from and appreciating their own reality, now in the third person.

Perhaps the common axis of all the works is depth, different but at the same time linked to similar sensations: the spectator enters the work as well as its creator. In this display of different characters, the paradox extends itself: the hidden becomes visible. Identities allows the materialization of the most hidden part of the work: the artist’s identity.