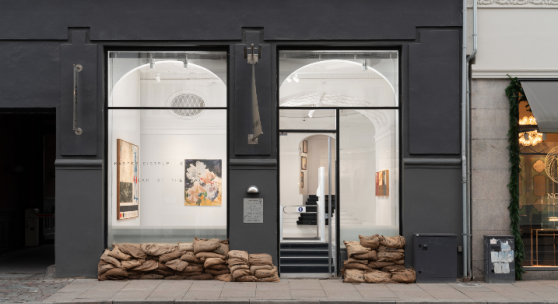 Martin Asbæk Gallery is pleased to present a duo exhibition by Kasper Eistrup and Chris Hood. From mutual admiration and a common sentiment towards the present, overwhelmingly turbulent year that is 2020, the two artists have joined forces, while keeping a distance, in Year of the Rat. Together separately, as the timely saying goes.

In the Chinese Zodiac, the Rat has the ability to turn unlucky events into fortune, and it represents the beginning of a new day, among other aspects. The optimism and auspiciousness associated with the Rat is certainly a welcome sight. In the West, however, the rat is largely viewed as unsanitary, in part due to historical events, as rats were blamed for being the main carriers of the Plague in the Middle Ages which killed a third of Europe’s population. The two painters have found a certain reflective solace in this striking, pertinent ambiguity of the rat. It’s impossible to make an exhibition detached from reality. Even though these works don’t include explicit references to the current pandemic, they’re made in a time of isolation, dislocation and anxiety. Visual expression is always a reflection of its surroundings, that’s the intrinsic lesson of art history.

Kasper Eistrup’s new paintings largely adhere to a formula that delicately counterposes elements of order and chaos. Each work consists of fields of separate and distinct visual expressions, ranging from meticulously painted depictions of people or things, to pure, emotional abstraction. These components interact, not as a linear progression, but rather like a rhizomatic entity. Bursts of intensity, intuitive brush strokes, composed details, and relatively uninhabited zones of color patterns are all connected, and charged with meaning, ephemeral as it may be.

This exhibition marks a move towards creating works in which immediacy and indeterminacy play a larger role. With the cross-pollination between each contrasting section, along with the increased focus on abstraction, Eistrup seems to invoke a new kind of fragmentarism, while retaining his characteristic touch. Countless layers of paint add a tactile dimension, as well as a sensation of temporality – a wistful longing, perhaps for the return of an unsubdued world, or perhaps in the sense of anemoia, the nostalgia for a time you’ve never known.

The fractured imagery of American painter Chris Hood combines motifs from personal photographs and drawings, as well as from mass media. This fusion of subject matter stemming from vastly different sources elicits a kind of collision of space, typically centered around an altered landscape. The elements in each work can be rendered in emphatically different ways – either with near-photographic precision, as a line drawing, or in a cartoonish fashion – creating an elusive scene inducing an almost phantasmagoric feeling.

Hood employs an extraordinary technique as he paints on the reverse side of the picture plane and lets the paint bleed through the canvas. Emerging on the other side, the final work reaches the surface slightly diluted, reminiscent of fabric faded by the sun, appearing to be simultaneously coalescing and degrading. With this remarkable approach, the trace of brush strokes virtually vanishes, consequently producing a flatness that brings about a sense of distance and unsure familiarity which can seem alienating to some extent.

While Eistrup divides the canvas into sections of varying abstraction and works with a significant number of layers, Hood’s surreal scenery is interwoven and kept in the liminal space itself – Nonetheless, the two artists are similar in their efforts to synthesize contrasting visualities, united in their quest to promote dialogue between divergent elements and artfully break down the barriers, together separately.

Kasper Eistrup was born in 1973 in Copenhagen where he lives and works today. He began his creative career in the 1990s as the lead singer and founder of the Danish rock band Kashmir. Alongside his musical endeavors, he has worked with visual arts on a professional level and has exhibited paintings since 1999. In 2018, Kasper Eistrup was commissioned to paint a portrait of His Royal Highness Crown Prince Frederik. Eistrup has subsequently had exhibitions in Denmark, China and Spain.

Chris Hood is an American artist born in 1984 in Atlanta, Georgia. He currently lives and works in Los Angeles, California. Graduated at the San Francisco Art Institute in 2010. He has had numerous solo and group exhibitions in North America and Europe, including at the Saatchi Gallery, London, UK; Lyles & King, New York, US, and The Zuckerman Museum of Art, Kennesaw, Georgia, US.

Experience the exhibition in 3D by clicking here