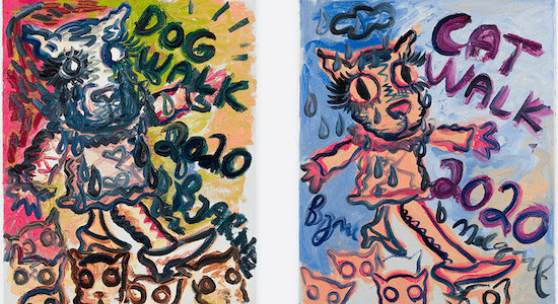 Thaddaeus Ropac Paris is pleased to announce the exhibition Elisabeth and Me (sic)* with new paintings by Norwegian artist Bjarne Melgaard inspired by the life and work of Elizabeth Wurtzel (1967–2020), the author of Prozac Nation. Independent, radical and non-consensual, Bjarne Melgaard is known for his provocative approach to art, dealing with social, political and ideological issues. His new paintings reflect the psychological and social consequences of the current pandemic, such as depression and isolation. They are displayed on specially designed wallpapers referencing Elizabeth Wurtzel’s life and writings for a site-specific installation.

Polymorphously prolific, Melgaard works across the arts in painting, sculpture, installation, fashion, literature, architecture, curating, video and augmented/virtual reality. He frequently incorporates a wide range of multimedia elements and invites other collaborators into his interdisciplinary projects.

Melgaard’s new series was initiated by his experience of today’s society and his visceral interest in Elizabeth Wurtzel: “My new body of work came from the fact of being in lockdown and rereading Elisabeth Wurtzel’s book Prozac Nation published in 1994 where she chronicles her battle with depression and More, now, again: A Memoir of Addiction from 2004 that centres primarily on her struggle with addiction and isolation. No other writers have had such an impact on me as her. For this exhibition in Paris she is again at the epicentre as my fellow-mate in my own paintings. Forever the protagonist of unapologetic behaviour and creative genius, her voice resonates more with me now than ever before. In these troubled times Elisabeth seems like the best of companions when lockdowns and isolation is such a new part of our common experience.”

Melgaard never met Elizabeth Wurtzel in person but felt connected to “the uneasiness, the unpleasantness of her writing” as a way to confront the most difficult problems. Only recently he discovered by chance that they had not only common roots in the Nordic culture, but also the same Norwegian psychotherapist who she visited every year before she died in 2020. In her cult novel Prozac Nation, Elizabeth Wurtzel wrote in 1994: “That is all I want in life: for this pain to seem purposeful” and added at the end of her poignant testimony “The fact that depression seems to be ‘in the air’ right now can be both the cause and result of a level of societal malaise that so many feel.” Melgaard’s nonstop creative practice has always been cognisant of the lows of human nature. Investigating, sharing and embracing Elizabeth Wurtzel’s witty and painful self-scrutinizing and her dystopian worldview guided him to this series of expressive, vividly coloured canvases. They are populated by hybrid human and animal characters, cat or dog-like, with sexual connotations, exploring the fluidity of gender and open for multiple interpretations, ranging from a seemingly childlike humour to despair and the uncanny.

Melgaard’s characteristic rapid brushstrokes indicate an urge to express himself without any restrictions, to capture a relevant feeling about the here and now. Contrasting with its joyful colours, the paintings echo the darkness and pain that he recognises in Wurtzel’s writings, which become particularly poignant in light of the current global social-psychological crisis. Commenting on the diptych entitled Dog/Cat Walk that pairs two of his semi-cartoonish characters, Melgaard says that it impersonates our current life experiences, as we “walk over ourselves starring in our own everyday drama”.

Painting smaller formats for his exhibition in Paris has allowed Melgaard to engage in a more intimate and psychological tête-à-tête with his female alter-ego. The animalized figure of Elizabeth Wurtzel on candy-coloured blue, green or pink backgrounds haunts his paintings as an obscure object of his different feelings and desires. In his eyes these characters (either in his paintings, novels or other artistic fields) are like “signatures” and Melgaard sees his new paintings “as portraits of me and Elisabeth and maybe also of how I can feel and relate to her ideas and writings, especially about addiction.”

However, by depicting an existing person like Wurtzel, Melgaard steps into different phantasmagoric grounds, where the blending of real and fictional characters allows him to establish his very own ‘mythology’. In her author’s note of Prozac Nation, Wurtzel quoted the Talmud: “We do not see things as they are. We see them as we are”. In his homage to her thinking, Melgaard pursues his own introspection. By layering auto-biographical sediments of his life and crossing different genres and forms, he constantly reinvents his artistic expression through the flow of his auto-fictional narratives: “The characters in my paintings - are they good or bad? I don’t know. It can be debatable. There is something subversive in it and in a way that intensifies the extreme quality of my pictures.”