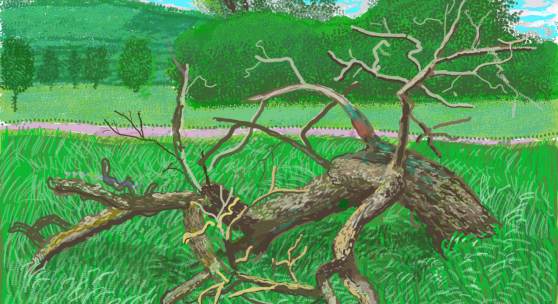 In the midst of a pandemic, David Hockney RA captured the unfolding of spring on his iPad, creating 116 new and optimistic works in praise of the natural world

Throughout his career, he’s investigated new technologies and explored different ways to make art, beginning with his iPhone in 2007 before adopting the iPad and Stylus in 2010.

This new body of work – 116 works in total – has been ‘painted’ on the iPad and then printed onto paper, with Hockney overseeing all aspects of production.

As Hockney himself notes: working on the iPad requires the ability to draw and paint. Each work – which has been printed far larger than the screen on which it was created – allows you to see every mark and stroke of the artist’s hand.

Made in the spring of 2020, during a period of intense activity at his home in Normandy, this exhibition charts the unfolding of spring, from beginning to end, and is a joyous celebration of the seasons.

Opening exactly a year after the works were made during the global pandemic, this exhibition will be a reminder of the constant renewal and wonder of the natural world – and the beauty of spring.