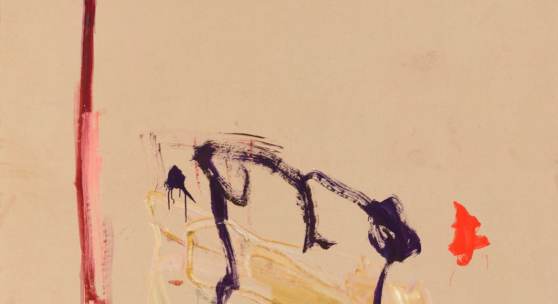 My pictorial reality is charged with passion, a language tied to the body, to dynamic movement. Painting is a matter of form, and then it receives a soul – through me. — Martha Jungwirth

For her first exhibition at Thaddaeus Ropac, Austrian artist Martha Jungwirth (*1940 in Vienna) presents a new series of paintings of animal-like and abstract figures rendered with her characteristic palette of reds, violets, yellows and magentas. The works were made during the pandemic, almost like a diary of isolation, reflecting Jungwirth’s intimate connection to herself and the external world. What emerged are expressive, poetic and emotional paintings, ranging in size from smaller formats to polyptychs evoquing ancient myths, the limits of civilisations and the fragility of life.

Martha Jungwirth’s work draws on various sources – the human body, travelling, art history, mythology, historical, social and political contexts – capturing fleeting, internal impulses that are recorded in paint. Her compositions hover between abstraction and figuration, the unconscious and the intentional, unbound and free, only committed to their own truth.

Martha Jungwirth recalls her situation during the making of her new works: ‘I was confronted with my own self during the pandemic, because I was completely isolated. I don't live from reality, I live from art. The vitality of life, the sensations, all that was missing – the impressions from the outside world, from other art and artists. These interactions are very important for my work.’

In her new paintings, allusions to animals and the human body surface from the brush strokes and blotches. Jungwirth’s personal situation over the past year, and the situation globally, influenced the way she approached these new works: ‘When you are isolated you make a jigsaw puzzle out of your memories, some things are more animated and lively, they hang together like a mycelium. This context in which I had to live has had an effect on my life. My work was reduced to the gesture, the skeletal. Condensation.’

Tragedies of our time and mythology inspired her new series, particularly when she saw ‘the animals that perished miserably in the bushfires of Australia. There is something apocalyptic about that. First the animals burn, then the people.’ The artist’s interest in Greek mythology, which she studied over the years when travelling in Naxos and Paros, enabled her for loose comparisons to the tragic aspects of the present era. She describes her journeys as ‘painting escapes’ (‘Malfluchten’) which are essential for her work, as they allow an exposure to the alien, to the “other”, to experience life more intensively.

'My art is like a diary, seismographic. That is the method of my work. Drawing and painting are a movement that runs through me. The image is an intelligent structure of lines and blotches, nothing stuck. It's about the fluid, the transparent, the open. I am not interested in the noble, but the sore, not embellished, uncensored.' — Martha Jungwirth, 2012.

Even though Martha Jungwirth stated in the past that she paints in such a way that things can’t be identified, some of her new paintings are more openly figurative. They allude to the shapes of a dog, a horse or an ape but are coming into existence like hallucinatory manifestations born out of the unconscious. The reduced pictorial language of these works recall the archaic preverbal world as the first lines drawn in cave paintings, acknowledging ties with the origins of art.

A number of works on view are entitled Metopen, the small decorative friezes and spaces in between the supporting features of Greek temples. They possibly exteriorize the idea of missing visual links and junctions for imaginary structures, emerging from Jungwirth's fluid painterly process, constantly seeking a transition from a material to a transcendent world.

Some of the titles of her recent paintings reference heroes and gods from Greek mythology, such as the philosopher and early psychotherapist Antiphon, the Trojan princess Andromache and Hades, god of the dead and king of the underworld. In the paintings, mythological human tragedies, rendered in abstract forms that echoe fragmented bodies, coexist with animal-like figures. For instance, her three largest works in the exhibition – the seven to nine meter long triptychs, La Grande Armée, Tutenchamon and Hades – depict a group of phantomatic skeletal animals, at a halt, facing an uncertain destiny suspended in the limbo and on their way into other worlds.

The smaller paintings, Bukefalos and Marengo, present the legendary war horses of Alexander the Great and Napoleon as fragile primeval and timeless silhouettes, caught in transition. The emblematic horses are not captured as heroic relics of a glorified past but as sacrificed witnesses of the wars, tragedies and natural catastrophes that have occured over time, hinting at the violence and cruelty perpetuated in the course of different civilisations.

Storms of colour and precise, spontaneous mark-making, layering of blotches along with structured compositions have resulted in works poised between chance and calculation. Her process is in direct accord with the body, with finger marks and scratches remaining as a visceral record of her presence in the work. The vivid colour palette of her new works dwells in a similarly corporeal register of fleshy pinks, violets, yellows, browns, reds and magentas.