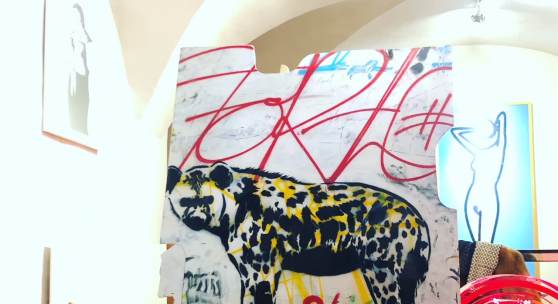 XOOOOX usually works on old facades. Vintage looks and positioning are important to him. Occasionally, however, there are also works on “movable goods” such as steel doors or electrical boxes. Street art lives from what surrounds it and the situation in which it is created. Rough facades, rusty gates, windy corners, time pressure, most difficult conditions for creation. This is the reason why many of the XOOOOX artworks offered in galleries are created on authentic wooden and steel supports. He also works on large copper plates that develop a special aesthetic in light, which changes over time.
French street art artist Blek le Rat introduced XOOOOX to the stencil technique. He was a pioneer of the stencil, who was also on the road in Berlin.
The New York Times recommended XOOOOX as one of “12 Treasures of Europe” on October 17, 2014. The Urban Nation Museum in Berlin purchased a work for its permanent collection in February 2018. In Amsterdam, the largest Street Art Museum of the world was recently opened in Lasloods Hall. The museum was founded by Peter Ernst Coolen on the premises of the NDSM docks. XOOOOX originals are also on display there as part of the collection.
At the age of 16, XOOOOX began to flip through his sister’s countless Vogues, cut out the models and glued them to surfaces in the city. Later he switched to stencils. He tries to contrast with the glamour of the fashion world by applying the stylish and flawless models to weathered and urban surfaces. In many of his works he also uses logos of fashion brands like Hermes or Chanel, which he alienates. In some cases, this can also be understood as homage, as is the case with brands that look back on a long tradition. In others, however, it is rather a criticism of the over-industrialization of fashion and they invite the viewer to question it.
In the Cologne auction house Van Ham a unique piece by XOOOOX set a new auction record on October 7th, 2020. The work Laguna Bay (stencil on metal) reached 8.925 € or $ 10.000 US.