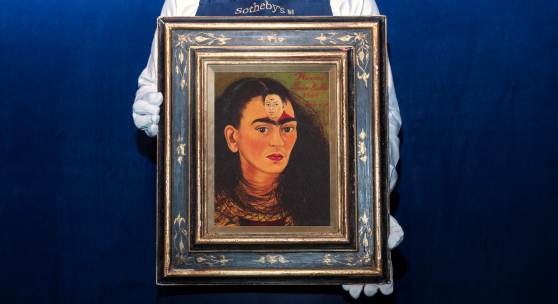 NEW YORK, 22 September 2021 – This November, Sotheby’s will present Frida Kahlo’s 1949 self-portrait, Diego y yo (Diego and I), the final, fully realized ‘bust’ self-portrait completed before her death in 1954. Offered as a star lot in the Modern Evening Sale in New York, this historic work carries an estimate in excess of $30 million.

Diego y yo is a quintessential example of Frida Kahlo’s singular approach to portraiture. Intense and emotional, this important work by the beloved and renowned artist is poised to shatter her current auction record of $8 million achieved in 2016 and may become the most valuable work of Latin American art ever sold at auction. The Modern Evening Sale, formerly the Impressionist & Modern Art Evening Sale, will inaugurate a larger reorganization of Sotheby's General Fine Art evening sale categories taking effect this November in New York. (More details to be announced at a later date.) Diego y yo will be on public view 7 - 11 October in Hong Kong and 22 – 25 October in London before returning to New York for exhibition before the November sale.

Brooke Lampley, Sotheby’s Chairman and Worldwide Head of Sales for Global Fine Art, remarked: “Frida Kahlo’s emotionally bare and complex portrait Diego y yo is a defining work by one of the few artists whose influence transcends the world of fine art to pop culture and beyond. To offer this portrait in our Modern Evening Sale in November heralds the recent expansion of the Modern category to include greater representation of underrepresented artists, notably women artists, and rethink how they have historically been valued at auction.”

Julian Dawes, Sotheby’s Co-Head of Impressionist & Modern Art in New York, said: “A painting by Kahlo of this quality and excellence is a rarity at auction. When I look at this painting, the phrase “abre los ojos,” Spanish for “open your eyes,” immediately comes to mind. In the literal sense, it refers to the penetrating stare of Kahlo as the sitter of the portrait (and the double portrait of Rivera), but I think it also symbolizes the incredible moment this painting will surely usher in for Kahlo, as the market opens its eyes to Kahlo in a new way and secures her place in the auction echelon she belongs.”

Anna Di Stasi, Sotheby’s Director of Latin American Art, commented: “Frida Kahlo is a global icon of modern art whose work is beloved around the world. Diego y yo, epitomizes the painstakingly detailed rendering, complex iconography, and deeply personal narratives that are hallmarks of her mature painting.”


 Frida Kahlo, Diego y yo (Diego and I) Estimate in Excess of $30
Sotheby’s Auktionshaus