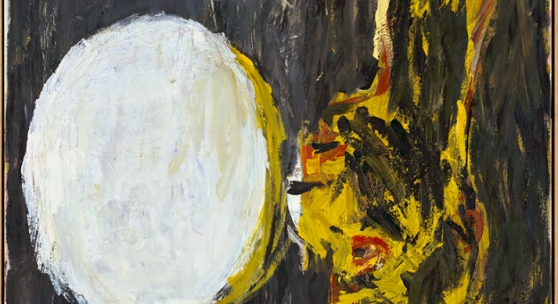 In 1982, curator Rudi Fuchs aimed to restore the ‘dignity’ and aesthetic ‘autonomy’ of contemporary art in documenta 7. In a dramatic departure from the ‘petty wars of style and manner’, he replaced traditional groupings with unexpected, even jarring, encounters between artists. He surprised audiences by placing contemporary artworks alongside classicist sculptures from museum collections in Kassel, underscoring relationships between old and new. This groundbreaking curatorial approach, which he called ‘weaving a tapestry’, used poetic metaphor to create unconventional connections between works while celebrating the artistic individualism of each participant. Almost forty years later, looking back at the works created in this historic moment creates linkages between past and present, in keeping with the spirit of the original exhibition.

Georg Baselitz’s works from the 1980s marked a shift towards a freer, more expressionist application of paint and use of colour, resulting in works of astonishing vigour and formal power. In Blick aus dem Fenster (1982), the roughly articulated head emerges from the murky depths of the gestural black background, balanced against the white round of the moon. The figure’s facial features are coarsely articulated in red and black lines against the underlying yellow, reduced to essentials that convey the impression of a face without actually depicting one.All kinds of new things emerged in his paintings [from the 1980s], along with different variations in the painter’s signature style, which was always energetic and restless. Even now I am captivated by their ingenuity and restlessness. Now I see more clearly that Baselitz always wants to make each painting (or every group of paintings) completely new, something that has never been made before. — Rudi Fuchs, 2018

The decisive graphic lines and strong contouring in Skulptur (1982) reflect a close affinity with Baselitz’s sculptures, which he began creating in the 1980s. Both show direct traces of the artist’s hand, whether as pencil strokes on paper or tool marks on wood. The artist explicitly links the two mediums: ‘In sculpture, using the saw is an aggressive process which is the equivalent of drawing. It’s a linear signal. For example, when you can see the ribs, this hasn’t got an anatomical significance, it’s not justified by anatomy, but it is a fascination that gives life to the body.’

The 1980s was a pivotal decade that saw Baselitz develop a truly international reputation, through his participation in widely publicised exhibitions such asA New Spirit in Painting (1981) and German Art in the Twentieth Century (1985) at the Royal Academy of Arts, London; Zeitgeist (1982) at the Martin-Gropius-Bau, Berlin; and Expressions: New Art from Germany (1983), which toured the United States. That same year, a major retrospective was presented at the Whitechapel Art Gallery, London, later travelling to the Stedelijk Museum, Amsterdam, and the Kunsthalle Basel.

The 1980s marked a stylistic departure in Gilbert & George’s pictures, which became bigger, brighter and bolder as they introduced vivid primary colours into their previously monochrome works. As they explain, ‘At first we used red and then we used red and yellow. Now we use more colours, but in each picture they mean something different. It depends on how we put them to work. They can be symbolic or they can be atmospheric or emotional.’ While retaining their characteristic gridded format, the individual images flow across these internal borders to form complex figural arrangements, enlivened by the strong use of colour that enhances the dramatic content of the works.

Our Art is the friendship formed between the viewer and our pictures. Each picture speaks of a ‘Particular View’ which the viewer may consider in the light of his own life. The true function of art is to bring about new understanding, progress and advancement. — Gilbert & George, 1986NAKED BEAUTY and STREET MEET (both 1982) form part of Gilbert & George’s MODERN FAITH series, which was exhibited in 1983 at the Sonnabend Gallery, New York, and in their first US retrospective the following year, which toured to venues including the Contemporary Arts Museum Houston, Baltimore Museum of Art and Guggenheim Museum, New York. The content of these works centred on urban living and the hopes and fears associated with contemporary society. They were awarded the Turner Prize in 1986, followed by a major exhibition at the Hayward Gallery, London, in 1987.

I had never seen a woman like that before. It was like looking at someone from another planet. — Robert MapplethorpeWhen Robert Mapplethorpe met Lisa Lyon — the first World Women’s Bodybuilding Champion — at a party in 1979, he was captivated by the incongruity between her masculine musculature and feminine features. The two collaborated on a series of over two hundred photographs, a selection of which were shown at documenta 7 in 1982 and published in the book Lady: Lisa Lyon the following year. Embodying what they termed ‘a succession of fantasies’, in these images Lyon ‘escape[d] the shackles of womanly stereotype’, transforming her body into a symbol of female strength.