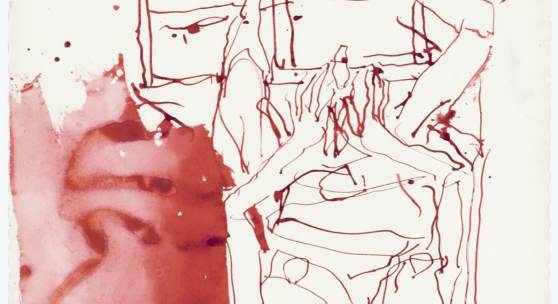 Neutrality is a myth, but you cannot give up the fight. You have to fight the conventions of the genre and the subject itself in order to make something new. The point of portraiture is to leave the portrait behind so that you can go forward. – Georg Baselitz

Coinciding with his retrospective at the Centre Pompidou, the exhibition Georg Baselitz, New Drawings at Thaddaeus Ropac Paris Marais brings together a selection of expressive, sensitive and intimate portraits in ink and watercolours on paper. Primarily realised in a new palette of vivid reds, these works engage in a dialogue between ink-drawn lines, washes of colour and undefined space. They include several self-portraits and a portrait of Henri Matisse, as well as numerous renderings of his wife, Elke, who has been central to the development of Georg Baselitz’s practice for over 50 years.

Georg Baselitz has continually renewed his practice through formal developments while often revisiting motifs from his own extensive oeuvre. Asked about this self-referentiality in 2017, he said: ‘I kept sinking into myself, and everything I do is being pulled out of myself.’ His choice to rework Elke repeatedly over the years in the same familiar poses – seated on her chair, or close up with her head resting in her hands – represents an ever-renewing declaration of love, as well as an intimate reflection on change and stability, on the inevitability of ageing and on the function of portraiture. Diverging from his recent black ink drawings, the vibrant flesh-red palette of many of the new works shown in New Drawings is inspired by Henri Rousseau’s 1895 lithograph La Guerre (The War) and intensifies the fragility and sensuousness of his depictions, making for expressive, sensitive portrayals of his wife. The intimacy of Georg Baselitz’s portrayals of Elke is also found in his self-portraits, as he lays his own body out on the paper for examination with a disarming frankness, which is heightened by the contrast between the artist’s sharp ink lines and his translucent application of watercolour.

Georg Baselitz often integrates references to art history into his work, turning the introspection of his self-portraits into a way of thinking through the history of painting itself. He looks to ‘the painters he cherishes, and more precisely to those who, like him, felt the end coming, felt death creeping in – whether it was physical or artistic’, writes Judicaël Lavrador in the October 2021 Beaux Arts special issue about Georg Baselitz’s retrospective at the Centre Pompidou. In Matisse (2021), the artist references Henri Matisse’s famous 1918 Self Portrait, in which the French painter shows himself at work in his studio. Baselitz turns the wooden chair on which Matisse painted himself upside down, in a way that resembles the wooden chairs on which he so often places his subjects. As he ages, Georg Baselitz expresses a growing affinity with Henri Matisse: ‘I remind myself of the old Matisse, standing there with his fat stomach and long stick’, he tells Cornelius Tittel in a 2021 interview for Blau International, comparing his feeling of being ‘more and more run down’ with how Matisse’s ill health affected the painter towards the end of his career. This parallel sheds further light on the similarities between Baselitz’s portrait of Matisse and his seated self-portraits.

This portrait is not Georg Baselitz’s first depiction of a fellow artist, but follows an earlier painting of Matisse, Ich habe mal Matisse gesehen (I once saw Matisse, 2018), as well as his 2015 series of ink portraits of Hokusai. By choosing to render both Matisse and Hokusai in ink, Baselitz pays homage to artists who have famously worked with the medium, while situating himself within the historical map of not only European ink painting, but also of Japanese ink traditions. These have significantly influenced his artistic approach, most notably Hokusai’s figures rendered in black ink and suspended in an undefined space.

The artist has been painting his compositions upside down since 1969, a format that he developed as a way to empty form of its content, to navigate between abstraction and figuration, and to revolutionise a medium that was then regarded as irredeemably conventional. The works presented in New Drawings all follow this distinctive configuration. When painting Elke, this gesture also serves to disrupt any harmony or beauty that is likely to seep into the portrayal of a figure so beloved by the artist, creating a defamiliarising effect which nonetheless never undermines the artist’s expressivity as he traces his particular path through the difficulties of representation in portraiture.

About the artist
In a career spanning six decades, Georg Baselitz has never allowed himself to become restricted by a single, identifiable style. He has redefined the conventions of the various media in which he works, including painting, sculpture, printmaking and drawing, and he is associated with the resurgence of Expressionism in the second half of the 20th century.

Born Hans-Georg Kern in Deutschbaselitz, Saxony in 1938, Georg Baselitz initially attended at the Hochschule für Bildende Künste in East Berlin before being expelled for ‘socio-political immaturity’ and completed his studies in West Berlin from 1957–1963. It was during this time that he adopted the name of his hometown. His first solo exhibition at Galerie Werner & Katz in Berlin sparked a scandal and several paintings were confiscated by the authorities amid accusations of public indecency. Rebelling against the dominance of abstract painting, his resolutely figurative works often incorporated shocking imagery intended to provoke a strong response in the viewer.